From purses to dentistry 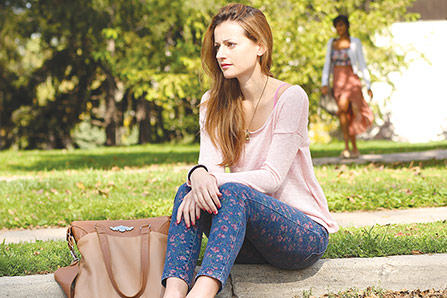 
Toronto native Sarah Shell was on her way to becoming a doctor before she ventured into the fashion industry.

“I veered off of it [because] I guess I was really listening to my heart at the time and it was telling me that it wasn't the time for me to be in the medical field.”

Shell volunteered in oncology while she studied biology at McGill, but found herself becoming emotionally attached to patients.

“I was watching the doctors; they were able to separate themselves in a way that needed to be done in order to properly treat and manage,” she explained. “I felt I didn't have that ability quite yet to be able to do that.”

“I wanted to pursue something creative on the side.”

A self-proclaimed tomboy in her youth, she started designing at the age of 12, but it wasn't until after a stint at Gucci that she started to appreciate handbags.

So it wasn't till the summer of her third year when instead of applying to medical schools, Shell enrolled herself into a summer program in fashion design at the Academia Italiana in Florence.

In her final year at McGill, Shell applied to Parsons The New School for Design in New York.

Following Parsons, Shell held positions at Gucci and Club Monaco before returning to Canada and working for a consulting company, where she was employed to study leather straps. It was there that she discovered her ability.

“I got a strap and after racking my brain, I went to a leather store and looked at some of the leathers there and decided that I would construct a bag as a birthday gift for my mom,” she said. “I wanted something that didn't blend in, something that was durable and luxurious.”

Her mother loved it so much, Shell decided to make one for herself.

Shell's launch into the handbag industry came when a Calgary store owner requested that she make some for the store.

The bags caught the attention of a writer for Fashion Magazine, who was writing an article on Calgary fashion.

“This whole time, I was an assistant buyer ... so I was doing that full time and I was making these bags on the side at this point,” she said. “In order to keep up with the demand I had to quit my day job and make [handbags] my full-time focus. I officially launched [442 McAdam] in 2008.”

Since then, 442 McAdam bags have been seen on the arms of Taylor Swift and Miley Cyrus, but Shell said she is more excited about seeing regular women carrying her bags on the streets than celebrities.

“Nothing makes me happier when my mom comes home and tells me she's all out of business cards because people have been stopping her on the street asking her where she got her bag,” said Shell. “I get the question a lot about celebrities but I want to focus on what's on my heart and that's hearing those kinds of stories.”

Shell explained the meaning behind her company's namesake.

“It's my grandparents' address,” she said. “My grandparents were Holocaust survivors ... They came from nothing...Those people who really fought for their livelihood know what's important and they taught me a lot. The least I could do in showing my gratitude [was] dedicating this company to them.”

When her grandfather passed away, Shell decided to re-evaluate her life.

“I felt like I needed more purpose in my life. As much as I loved this company and being in the fashion industry, I didn't want that to be my life story,” she said.

“My mind did always go back to the sciences; I love knowing how the body works,” she said. “I loved the idea of being able to have a positive impact on someone's health and welfare.”

“I think it was my dad who mentioned dentistry,” she remembered. “The moment that idea was brought to my head, I never looked back. I've never been happier and I'm surrounded by these interesting, intelligent people and the depth of what we do on a daily basis is so refreshing.”

But don't worry... she'll get back to 442 McAdam eventually.

“I need the science but I also need this creative aspect,” she said. “There's always going to be a balance between the two and I'm hoping to have the opportunity to go back to a larger scale once I'm out of school.”

To learn more or to order a handbag, visit 442mcadam.com.