Kia Koupe - the little car that could 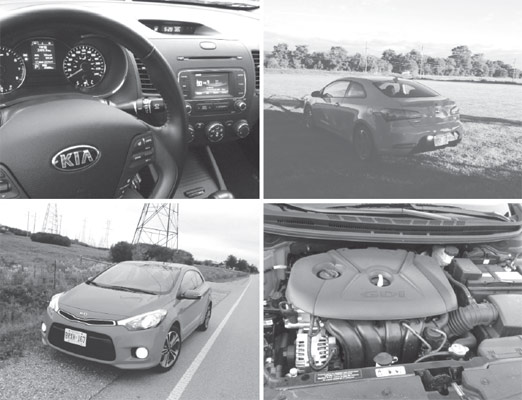 CREDIT: NAUMAN FAROOQ
Is the Kia Koupe a keeper? Nauman Farooq drove one for a week to find out

Entry-level coupes were all the rage back in the 1990’s. Almost every manufacturer offered them, with some – like Mazda – even offered two models to the buyers.

Nowadays, things are quite different.

Few car companies have entry- level coupes in their showrooms.

Sure Honda still has the Civic coupe and Scion will sell you a tC coupe, but Mazda, Nissan and Mitsubishi don’t. Even General Motors, Ford and Chrysler no longer have a vehicle in this segment.

One’s loss can certainly be another’s gain, and South Korea’s Kia Motors is certainly eager to pick up the void created by its competitors. So for the last few years, it had offered a stylish two-door coupe in the market.

To cut its development cost, Kia took a page out of Honda’s book and created their coupe on an existing cars platform, which in this case is the Kia Forte sedan. Sure, some adjustments to the platform were made, since the coupe – or should I say, Koup – version is shorter than the sedan, but still, the basics are all still intact.

From an outwardly appearance point of view, the 2015 Kia Forte Koup is an attractive car, but it is quite rounded and has soft lines, whereas its predecessor had sharp angles. While I like the new Koup’s styling, I personally prefer the old one.

The interior of the new Koup is a step in the right direction though. It is more spacious, has more features and the quality of the fit and finish has also improved – not that the old model was built out of cardboard.

Powering the 2015 Koup are two new engines. The base EX trim model gets a 2.0-litre, four-cylinder engine that produces 173 hp and 154 lb-ft of torque. The upgrade Koup SX model gets a 1.6-litre, turbocharged four-cylinder motor that produces 201 hp and 195 lb-ft of torque. Both models are available with either a six-speed manual or a six-speed automatic transmission, sending power to the front wheels. My tester had the former engine with the latter transmission (i.e. 2.0-litre motor with the automatic).

To be honest, I wasn’t excited to spend any amount of time with this model, because I thought it would be a boring coupe that is designed and built to appeal to teenage girls on the west coast. However, my socalled “chick car” turned out to be quite decent.

While its performance won’t get a car guy excited, and its soft suspension set up also meant it wasn’t built to attack corners, it was a comfortable highway tourer, and in the city, its light controls and good turning circle meant it was great in dealing with the urban jungle.

Would it be the kind of car I’d buy? Probably not, however, if you’re looking for your first coupe, this Koup might just be right for you.