In The Hands of Heroes: Scott Pilgrim's Precious Little Life 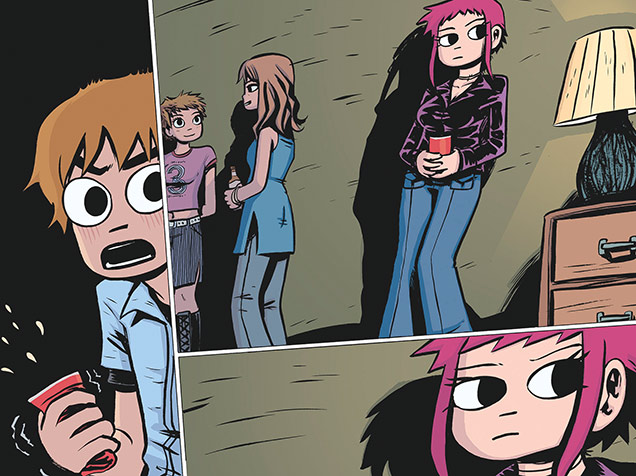 Credit: BRYAN LEE O'MALLEY
Ramona Flowers proves to be more than your average girl, find out why in Scott Pilgrim's Precious Little Life.

While you may have already seen Scott Pilgrim vs. The World, the comic book series that shares the same name and inspired the movie is quite a different experience. Imagine less colour, less over-the-top action sequences, less cheesy acting and less visual impact – and that’s what Scott Pilgrim’s Precious Little Life is.

Scott Pilgrim is a poor, unemployed 23-year-old, living and sharing a bed with his homosexual roommate, Wallace Wells. He’s obviously not thinking clearly as he’s dating Knives Chau, a 17-year-old high school student with absolutely no dating experience. It’s not the smartest or most responsible decision a 23-year-old could make, but as we learn quite quickly, Scott is neither smart nor responsible.

He is a jerk. There, I said it. What kind of 23-year-old decides to date a 17-year-old for fun? It becomes quite clear when everyone in Scott’s social circle starts asking him why he’s dating a high school student and doesn’t have anything to say beyond “it’s nice.”

Knives Chau being a naive teenager finds Scott’s age to be alluring in only the way a 17-year-old could find an unemployed 23-year-old fascinating. He’s older, not much wiser and in a not-so-terrible rock band called Sex Bob-omb. Knives immediately becomes Sex Bob-omb’s number one fan after seeing Scott play for the first time, which seems to make Scott uncomfortable to the point where he starts to lose interest.

The most redeeming character in Scott Pilgrim’s Precious Little Life is Wallace. He’s outrageously witty and sarcastic possibly the star of the book. It’s easy to laugh any time Wallace has something to say.

Shortly after Knives Chau falls madly in love with Scott, he starts having dreams of a rollerblading fantasy girl who he later sees while on a library date with Knives. Scott is so dumbfounded by the experience that he can barely function for the rest of the day.

Scott continues to dream about this unknown girl, going so far as to ask some of his friends if they know who she is. It’s at a party for one of his bandmate’s friends that he finds out that the unknown girl is the one and only Ramona Flowers, who just so happens to be at the party. He eventually finds the infamous Ramona after being told by everyone not to go after her. Scott has the most awkward exchange with Ramona, telling her “I’ll leave you alone forever now.”

He continues to stalk her until she leaves the party and then questions everyone at the party about her to find out any information he can. Not only does everyone tell Scott to leave Ramona alone, but it becomes clear the naiveté that Knives has in her relationship with Scott is the exact same in Scott’s situation with Ramona, the difference being that Scott seemingly has no chance.

This is where the strange and confusing love triangle begins. Scott is unable to face the reality that he needs to leave Knives, but he continues to pursue Ramona anyway. He eventually goes on a date with Ramona, and although they don’t seem to have much in common, the date goes surprisingly well.

The art style of this novel is cartoony, juvenile and unfinished but in a good way. It mimics Scott’s behaviour and mindset quite perfectly and at times, makes you forget that this is a story about a young adult. Bryan Lee O’Malley did a perfect job in capturing Scott’s world.

Scott Pilgrim’s Precious Little Life is like the teenage drama of high school mixed with the emotional stage of finally realizing you’re an adult. Growing up can be hard, and this is exactly what Scott’s life seems like. He wants to do the right thing, but he does all the wrong things instead. It’s a true coming-of-age story for Scott, one that will no likely lead him down a difficult journey, fighting many evil ex-boyfriends.

While some of the characters can seem flat and rigid at times, the supporting characters of Scott Pilgrim’s Precious Little Life bring a much needed humour component to this novel that would otherwise seem overly serious.

Scott Pilgrim’s Precious Little Life is an enjoyable read. It was like watching a train wreck about to happen. I still don’t like Scott as a character, but I’m so invested in the drama that I just can’t look away.

For this novel, or others like it, check out Heroes Comics downtown at 186 Dundas St.

With robotics, nerds can do anything

Gaming The System: Playing the worst games ever known

2
Upcoming movies to look out for this summer