In The Hands of Heroes: Stay warm under the Blankets 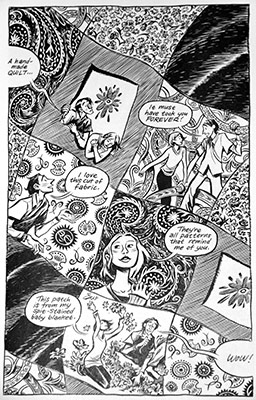 Credit: CRAIG THOMPSON
Thompson's penmanship and exquisite brushwork add to his already personal and touching tale of his first love.

This week’s comic book, Blankets, by Craig Thompson, was recommended by Brahm Wiseman at Heroes Comics.

Reading Blankets is a magical experience that delves into the most honest and raw parts of Craig Thompson’s life. This is what reading someone’s diary must be like, and I thank him for it. It’s a beautiful memoir.

Taking place in a blustery Wisconsin winter, Blankets begins with Thompson and his brother Phil at the sensitive time in a child’s development. A time where you still share beds with your little brother and you hate it. An age where if you acted out or disobeyed your parents, you were sent to the cubby hole to sleep on a rickety fold down bed – the kind that made you think you would be swallowed by its crocodile jaw of a hinge if you made the wrong move.

While Thompson’s devote Christian home life seemed far from perfect, his school life was something he truly feared. Because of Thompson’s poor upbringing, he was mocked for being skinny, stinky and diseased. Although at home his sibling rivalry is quite apparent, he fears his younger brother coming to school because he knows he won’t be able to look out for him.

Thompson eventually finds solace in religion, seeking out the Church and the Bible for comfort in knowing that nothing on Earth matters. Heaven will be his eternal reward for belief and devotion and that would be enough to ease almost anyone’s suffering. All he has to do is listen to his parents, pray for forgiveness and devote his life to Christianity and Thompson will bask in the glory of Heaven when his earthly life is over. The problem is that all his passions seem to be against God’s will.

The ritual burning of all his drawings and earthly pleasures leave Thompson feeling refreshed and fully devoted to his path of Christianity. He uses all his spare time to read and re-read the Bible. Each year, he goes to church camp to further study on the insistence of his family. However, church camp is full of the same people at school, and he eventually finds outsiders like himself to hang out with.

Church camp is where he meets Raina, his muse. Her beauty seems to completely blind Thompson from seeing anything else, and while he stays devoted to his faith in the beginning – like any typical teenager – Thompson waivers.

Their love story is one of innocence, passion, devotion and faith. Without Raina, Thompson would never fall onto the path that would bring him true happiness. I struggle not to give too much away with this novel, because it’s a reading experience I hope that everyone will have.

A truly honest spiritual journey from a young boy that grows into a confident but questioning young man, I watched in awe as he made some of the hardest, and often times painful life decisions anyone could. He’s brave in so many ways and conquers terrible experiences not with ease, but perseverance.

Thompson’s beautiful penmanship and brushwork is impressive and helps in expressing the personal qualities of this memoir. His clever way of expressing his inner feelings through abstract artwork amidst the characters as they fall or embrace is poetic and symbolic if you allow yourself the time to soak it all in.

While Blankets could be a short read if you powered through it, I wouldn’t suggest it. Allow yourself the pleasure of reading this masterpiece over a couple days, make sure to pay attention to every line, curve, and symbol present in this novel. You won’t be let down.

For this graphic novel, or others like it, check out Heroes Comics downtown at 186 Dundas St.