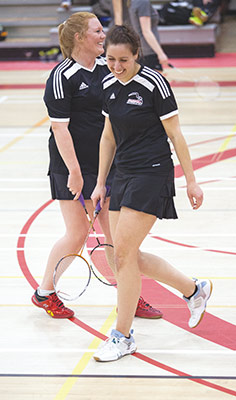 Fanshawe Falcons finished with a bronze in women's doubles at the Ontario Colleges Athletic Association provincial badminton championships that were held on February 20 and 21 at Fanshawe College.

Hogan and Grobbecke played a total of seven games, winning four and losing three, two of those to Humber.

“It was a good tournament for us,” said Falcons badminton coach Matt Plachta.

“Both the teams that made the provincials made very well,” Plachta said.

Neither teams will be competing at the Canadian Collegiate Athletic Association national championships, which will be held from March 4 to 7 in Halifax.

As for next year, Plachta says the goal is to build on the team.

“I'm hoping that we have a lot of returning players, and we do,” Plachta said. “I'm hoping to just build on them so we're even stronger next year.”

In The Hands of Heroes: Harvey Pekar takes you deep into Cleveland's history

A new season on the horizon for the Jays