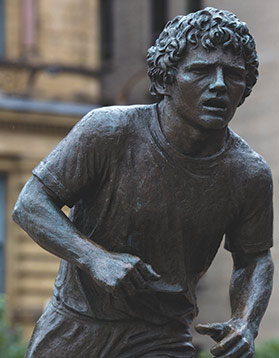 The Terry Fox Memorial in Thunder Bay marks the end of Terry's courageous Marathon of Hope.


Even 35 years after he dipped his artificial leg in the Atlantic Ocean and officially began the Marathon of Hope, it’s tough to find a Canadian who has not heard the name Terry Fox. The Canadian hero has garnered international recognition for his bravery and dedication to cancer awareness and has inspired millions of dollars’ worth of donations to cancer research.

Fox had a simple goal. He wanted to run from one end of Canada to the other to raise awareness on an illness that has touched the lives of almost every Canadian. Unfortunately his journey was cut short to 5,373 km when his cancer spread to his lungs, forcing him to end his run near Thunder Bay. Fox died at the age of 22.

Though Fox’s path did not include a stop in London, Londoners are nevertheless impacted by his message.The 2015 Terry Fox Run honouring the late hero’s battle with cancer will be held on Sept. 20 at Springbank Garden. Registration runs from 8 a.m. to 2 p.m., with the official start beginning at 10 a.m. Runners are given the option to choose between three distances: 2 km, 5 km, and a 10 km roundtrip.

According to the Canadian Cancer Society, every day in 2015 an average of 539 Canadians will be diagnosed with cancer and 214 Canadians will die from it. Two out of every five Canadians are expected to develop cancer at some point in their lifetime.

Peter Ferguson, a research associate at the London Health Science Centre and adjunct professor in the Department of Oncology at Western University, has been volunteering with the Terry Fox Foundation (TFF) for 10 years.

Though it was scientific curiosity that drew him to study oncology, or cancer research, his chosen profession hit a personal note when his mother Mary was diagnosed with Non-Hodgkin’s lymphoma in 1988 at the age of 55, dying from it only seven years later on Nov. 4, 1995 at age 62.

“Everybody you talk to is going to have some kind of a story like that in their family,” Ferguson said, noting that the situation was cruelly ironic.

Ferguson said it was difficult watching someone he loved die from the same illness he had dedicated his life to studying.

“It’s a frustrating feeling being in cancer research and having somebody that the physicians have tried everything they could to treat their lymphoma and there’s nothing you can do,” Ferguson said.

But Ferguson has been able to see for himself the innovative treatment methods that the TFF has helped fund.

“The methodology that was use [in the lab] is state of the art,” Ferguson said. “We use world class techniques, technology and equipment, and the people that are doing it are right at the top.”

Much like Fox’s journey, the continued success of the Terry Fox run stems from its simple mission: to fund innovative cancer research. According to the TFF, the organization has raised over $600 million for cancer research in the 35 years it has been running.

Ferguson said the goal for the run is to raise $125,000. The combined donations of all London Runs typically raise about $350,000, fulfilling Terry’s dream of donating one dollar for every Canadian.

“We want to maintain the really high status that the Terry Fox Run has,” he said. “So there’s a lot of work that goes into it.”

Ferguson suggests arriving early to Springbank Gardens on Sept. 20 if runners want to be ready for the 10 a.m. start.