Rumours of Grace: One refugee for every 14,000 Canadians 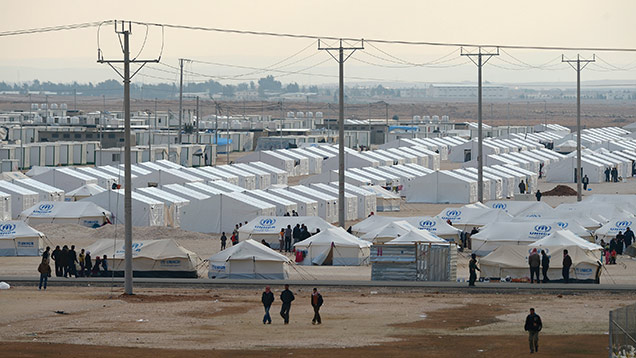 A general view of the Za'atari refugee camp on Jan. 30 2013 in Za'atari, Jordan. Record numbers of refugees are still fleeing today, the majority of whom are living in Jordan and Lebanon. Approximately 81,500 Syrians live in Za'atari, making it the country's fourth largest city. Jordan has one refugee for every 13 people in their country.


Editorial opinions or comments expressed in this online edition of Interrobang newspaper reflect the views of the writer and are not those of the Interrobang or the Fanshawe Student Union. The Interrobang is published weekly by the Fanshawe Student Union at 1001 Fanshawe College Blvd., P.O. Box 7005, London, Ontario, N5Y 5R6 and distributed through the Fanshawe College community. Letters to the editor are welcome. All letters are subject to editing and should be emailed. All letters must be accompanied by contact information. Letters can also be submitted online by clicking here.
Canadians, we like to say, have great hearts. We are generous and open handed and do well when faced with the challenge of helping people in the international community who are in trouble.

Canadians helped people fleeing the terror zones of southern Asia in the ‘70s. At that time it was churches that frequently stepped forward to welcome and house asylum-seeking families.

In the ‘90s, a war in Eastern Europe demanded our attention. A friend of mine who served in the Canadian Air Force at that time likes to tell the story of how thousands of refugees fleeing the war in Kosovo were flown to the Greenwood airbase in Nova Scotia. There they were processed and given passage to points in Canada where they made their homes.

However, the truth is that our record of treating outcasts is not pristine. In 1937, a passenger ocean liner named the St. Louis brought 907 Jews within a short sail of Nova Scotia. The Jews were fleeing from Nazi Germany. Although the passengers were desperate to have permission to land in Canada, authorities turned the ship away. News outlets, such as Herald News, cite widespread anti-Semitism as key to understanding Canada's decision to prohibit the landing of the St. Louis.

Farley Mowat in his book, People of the Deer, narrates the destruction of a northern Inuit tribe under the watch of the Canadian government.

As we now realize, Natives were systematically deprived of their lands and culture by colonialists. And up until the late ‘00s, Black communities in Nova Scotia were the victims of racist policies.

Nevertheless, there is once again opportunity for people within the borders of Canada to reach out to people fleeing deadly circumstances. But how many people can expect our help?

The parties seeking to govern Canada after the next election present conflicting numbers over varying periods of time. However, we could see a policy permitting 10,000 refugees to be settled in this country over the course of four years.

Ten thousand over four years simply means 2,500 people per year. That amounts to one refugee for every 14,000 Canadians per year. Those numbers hardly give off a welcoming demeanour to the traumatized survivors of harrowing escapes from Libya and Syria. These numbers do not inspire, they frustrate.

In the last several days Germany has said it will permit 500,000 refugees per year for the next several years. This may sound like a generosity that puts us to shame, but commentators point out that for Germany's rapidly aging and declining population, an influx of young families who are able to work would be a great economic boast.

The current population of Germany is just under 81-million; therefore, we are a little less than half the number the people of Germany. We also have a little less concern about an aging population than they do, but can't we bring in more than a feeble 2,500 per year for the next few years? Why can't we do something big right away like other European countries are doing?

Pope Francis is calling upon all Catholic churches to sponsor a refugee family. According to an online Catholic statistics site, by 2014, the number of Catholic parishes worldwide had risen to just shy of 222,000, with thousands here in Canada.

“Before the tragedy of tens of thousands of refugees fleeing death in conflict and hunger,” said Pope Francis. “The gospel calls us to be close to the smallest and to those who have been abandoned.”

The pope, I think, is showing the way. He is not doing a risk calculation or offering the cold hand of an iron bureaucracy, as many in our government appear to be doing, he is calling on people to respond now with courage, speed and grace.