George R.R. Martin: Not just a one trick pony 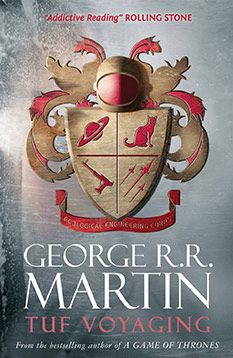 Tuf Voyaging is a perfect read for those who love science fi ction as well as the author George R. R. Martin, known for his best-selling novel The Song of Ice and Fire.


While most of us know him almost exclusively from The Song of Ice and Fire, which has been adapted into the wildly successful HBO franchise Game of Thrones (GoT), George R. R. Martin didn’t start out writing fantasy. Science fiction was Martin’s first love, and Tuf Voyaging, written in the ‘80s and reprinted more recently after the success of GoT, may be his greatest work in the genre.

Starting with a daring voyage to the far reaches of the galaxy to recover a derelict ship, the book focuses mainly on Haviland Tuf, a bald, overweight pilot with a very strong love of cats.

Working alone, Tuf becomes the captain of an insanely large ship, appropriately named the Ark, designed for the Ecological Engineering Core. With a length of 30 km and the greatest defense system ever imagined, the Ark comes with the power to clone life from hundreds of worlds.

Life, in this case, covers everything from harmless kittens to virulent diseases that can wipe out populations in an instant. The power Tuf comes to wield is terrifying in its totality and much of the book feels almost intentionally uncomfortable.

The novel questions the nature of God and humanity, with a large number of obvious biblical references to ensure the metaphor isn’t lost on the reader.

The novel is actually a collection of eight short stories that have connecting themes and characters, which means the focus sometimes switches dramatically. The underlying concerns of sustainability, environmental protection, and overpopulation run through all of the stories. The only real problem with the approach is that it can get repetitive as Tuf and his many cats are reintroduced in each section.

As Tuf travels from one planet to another, it’s easy to feel connected to some of the people he leaves behind and wonder what becomes of them. Luckily, one problem-filled planet, S’uthlam, is visited at regular intervals.

S’uthlam is a planet struggling to survive, overpopulated and underfed. Amongst its billions upon billions of people is one particularly strong and intelligent woman, Tolly Mune.

Mune is of special interest as a high ranking and childless official in a world where women are generally viewed as procreators. She manages to straddle a line of concern over the well-being of her overpopulated planet and frustration with the culture that has led to her needing to beg Tuf for help. Their interactions are some of the best in the book, with dialogue that keeps you reading long into the night.

Martin has always been a master of character development, managing to explore the motivations and complex dynamics of individuals, even if they only appear for a few pages. As readers of A Song of Ice and Fire know, he is not shy about killing off those characters when he feels it suits the story.

Tuf Voyaging is no exception, with amazing characters and sudden murderous pen strokes designed to leave you wanting more.