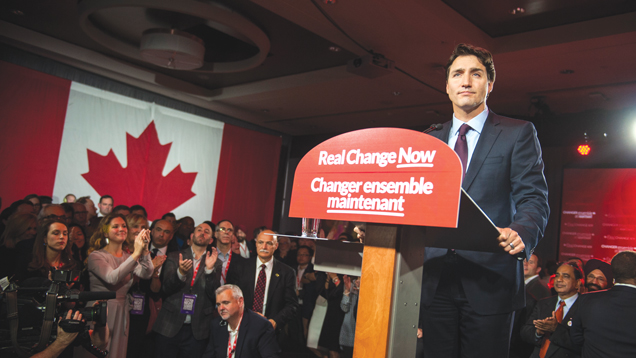 On Oct. 19 Canada made a decision to try something new when Prime Minister-delegate Justin Trudeau from the Liberal Party of Canada won a majority government.

The Liberal Party of Canada was able to secure a majority government with a staggering 184 seats, which shocked most Canadians who were expecting a minority government.

“This is what positive politics can do,” said Trudeau after hearing the news. “We beat fear with hope. We beat cynicism with hard work. We beat negative, divisive politics with a vision that brings Canadians together.”

The Liberal campaign was run on the promise of change. With a Liberal majority some things that we can expect to see would be an inquiry into missing and murdered indigenous women launched immediately, a 10-year, $60 billion infrastructure plan to help create jobs and stimulate the economy and to bring in 25,000 Syrian refugees by Jan. 1, 2016.

Trudeau stated, “Canada is a country strong not in spite of our differences, but because of them.”

Trudeau has also turned his attention to post-secondary students by promising an increase in the Canada Student Grant program to a maximum of $3,000 per year for full-time students and $1,800 for part-time students.

This is a 50 per cent increase for full-time, low-income students. He has also promised to change the repayment of student debts so that you do not have to make payments until you are making at least $25,000 per year. Additionally, he will add an extra $50 million to support indigenous post-secondary students.

Trudeau has promised to appoint women to half of the Liberal cabinet minister positions. He has stated that they will take their oath on Nov. 4.

This is an historic election as no other past Prime Minister has had a family member elected to office as well. Trudeau is the son of Pierre Elliott Trudeau, the 15th Prime Minister of Canada. Pierre Trudeau was the reason that Stephen Harper became involved in the Conservative Party of Canada, then known as the Progressive Conservatives.

And it is now because of Pierre Trudeau’s son that Harper has stepped down as the leader of the Conservative Party.

Prime Minister-delegate Trudeau has set high expectations for himself and the Liberal government, expectations that Canadians will be watching for him to fulfill.

If his role as the leader of this country is at all reflective of his victory speech, he will inspire many Canadians and bring this country back to the inclusive and dependable country that we once used to be, refocusing on our humanitarian role in the world.

As said in Trudeau’s victory speech, “I didn’t make history tonight, you did.”