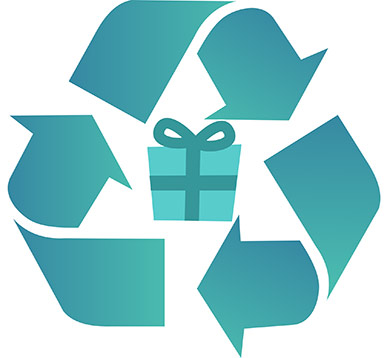 
‘Twas the night before Christmas,

when all through the house, not a

dollar was spent on your father’s

new spouse. But how do you show

your loved ones you care, when

you’ve not even a cent to spare.

show you the tips and tricks, don’t

1. Be sensitive to feelings

Not everyone views gift giving the same way, so it’s really important to remember who gave you the gift originally and try to keep in mind the value they attach to it. Some people figure that once a gift is in your possession you’re free to do whatever you want with it. Others feel that returning or re-gifting something is insensitive and even hurtful. Try to keep these differences in mind before giving an item away, although most of your friends or family members are more than willing to wonder aloud where something is if they’re the type to care.

Even if your friends are a bit more blasé about what they give you and where they go, it’s still a good idea to give to different friend groups. Got a weird bubble glass art thing from your mom? Maybe that’s exactly something that girl in your res would love. Did someone give you a spider plant not knowing about your black thumb? It’s a perfect gift for your cousin. The key is to avoid giving things to people who interact a lot with the original gift giver.

3. Keep an eye on condition

If you know you don’t really like something, it’s easy to keep it in the original packaging so you don’t have to worry about it being damaged between the receiving and re-giving. If you’re undecided – or are feeling pressured to open whatever it is right then and there – try to put it somewhere safe and out of the way, and give it a lookover before giving it away. If it’s something you used to like but think would suit someone else more, make sure it’s free of holes, stains or scratches before passing it on. As much as your buddy may have loved your vintage leather jacket, he probably won’t appreciate the gift as much if there’s a huge tear through one of the sleeves.

Obviously receiving a gift and turning around and giving it right to the person sitting on the other side of you is inappropriate, but when is the best time to give away something you just received? A good rule of thumb is to wait at least six months. This is generally enough time for a girlfriend to point out she’s never seen you wear something, or for her to forget she even gave it to you in the first place. Most people are pretty forgetful, and after that amount of time are unlikely to remember whom they gave what to anyway.

Since you aren’t spending any money on the present itself, it’s a good idea to put more effort into the wrapping. It doesn’t cost much to get a new gift bag or some fancy-looking wrapping paper, and a little bow or some ribbon can make even the worst wrap job look nice. It’s also a great idea to add a personal card, preferably with a few sentences on why that person is awesome or why the item made you think of him/her in the first place. For a lot of people, the personal message is more important than the actual gift anyway.

While honesty is generally the best policy, it’s also important to remember that when people’s feelings are at stake, morality isn’t exactly black and white. Feel free to use the words, “I don’t remember” when you’re asked where you bought something. If a friend wonders where something went, you can always say that you misplaced it or lost it in a move, which happens all the time no matter how careful you are.

Should your social networks collide and someone actually recognize and call you out on your re-gifting, you should be honest and explain how much more you thought the other person would enjoy the item. There’s nothing inherently wrong with giving away your own possessions, and most people are reasonable enough to understand that it’s better off with someone who will love it than collecting dust in the back of a closet.

Re-gifting is not something to be ashamed of. As long as you are still giving thoughtfully then nothing else matters. Remember, the holiday season is about giving back to those who have given so much to us. These tips just help you save money while keeping those you love happy.