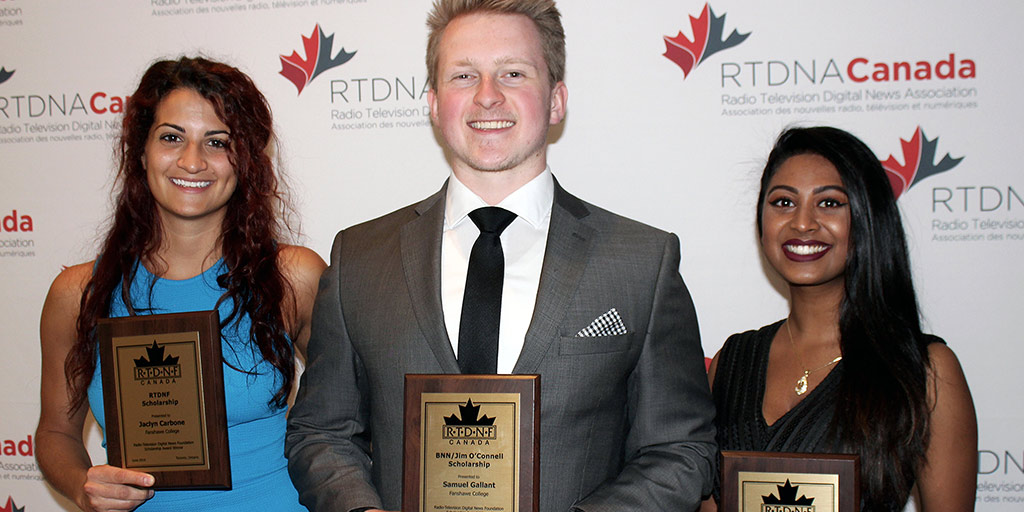 
Fanshawe has again proven itself on the world stage after Broadcast Journalism students won three national awards at the Radio, Television and News Digital News (RTDNF) conference held June 2 to 4.

Among these winners was first year student Ajiitha Anand, who received the Canadian Press / Eric Murray Scholarship for Aboriginal Persons and Members of a Visible Minority.

The Eric Murray Scholarship is received by a single post-secondary student each year and is determined by the submission of a documentary, newscast or sportscast.  Anand won the scholarship after submitting a powerful documentary on the importance of art in post-secondary institutions with a focus on Western’s Nuit Violette art exhibition.

Anand began her journalism career at Western University but left after completing her first year studies.

“ The first year I was at Western I was not happy because I wasn’t getting any hands-on experience and that’s all I wanted.”

This problem was resolved when she started at Fanshawe.

“In my second year I came to Fanshawe and every single day I was doing something hands on. My assignments involved reporting newscasts on The X, interviewing local businesses and editing audio news stories. It increased my anxiety but it really put me out there, I started feeling like an actual journalist.”

Anand believes that Fanshawe’s intimate class sizes provided her with the support network and experience needed both inside and outside of the classroom to propel her career to the next level.

Although the award holds high importance to Anand, she believes the best part was attending the RTDNF conference where she brushed shoulders with the likes of CBC news anchor Peter Mansbridge and spoke with CTV news anchor Lisa LaFlamme. “More than winning the scholarship and award, having the opportunity to be in a room full of professional journalists was amazing,” Anand said, “I came out feeling motivated and positive about the future.”

“We treasure each of these awards. The students work so hard and to be rewarded like this really inspires them, especially in front of industry professionals and their future employers. Our faculty is very proud of our winners and all those who submitted." This years achievements bring Fanshawe’s award count to 68 since RTDNF began awarding the scholarships 37 years ago.

Anand has been making the most of her summer before returning to Fanshawe by gaining experience as a full time reporter for the FSU Interrobang newspaper. The job has helped her expand the scope of her work taking on more creative topics and pursuing her interests in video stories.

Be sure to catch her feature articles in special issues of the paper all year long.