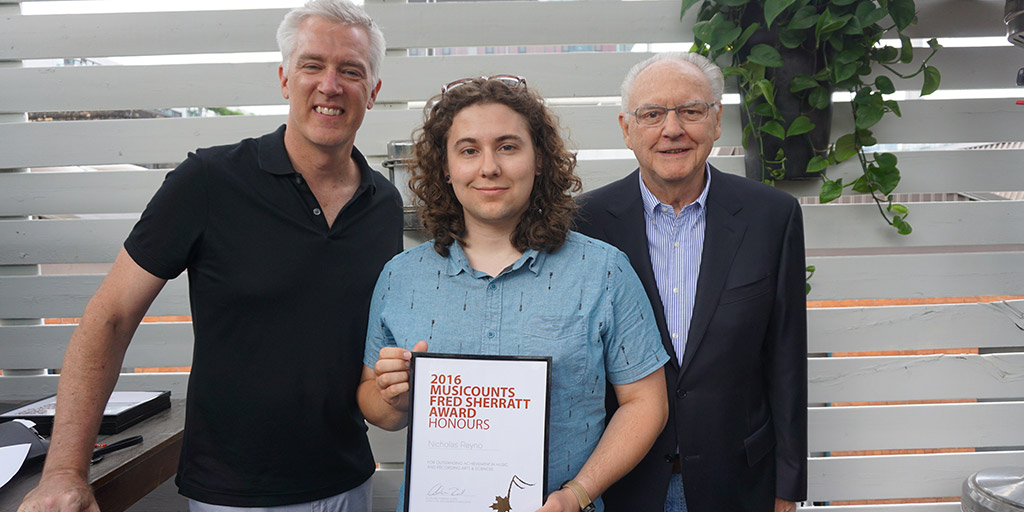 Nick Reyno (centre) was one of 12 winners of the Fred Sherratt Award recognizing student excellence in post-secondary institutions across Canada. He met multiple industry professionals including Allen Reid (left) and Fred Sherratt (right).


Nick Reyno, a graduate of Fanshawe’s Music Industry Arts (MIA) program and Interrobang contributor, was a winner of the MusiCounts Fred Sherratt award.

The award, which is given out to only 12 music program graduates across Canada, was designed to help with the transition from student into a career in the music industry. The recipients of the award each took home $2,500 which was presented to them at a ceremony in Toronto on June 28.

The winners also got to meet with industry professionals and toured some studios in the city that are well-known for music production including Universal, Bell Media, Noble Street Studios and more.

Reyno, who was nominated for the award by faculty members in the MIA program, said he almost couldn’t contain his excitement when he found out he was a winner.

“I wasn’t expecting to win any awards whatsoever… This was really quite a shock. I ran laps around the school just to blow off the excitement,” he said.

During his time in Toronto, Reyno met Fred Sherratt, the man in which the award was named after, along with other big names in the industry.

In an article published by Music Express called “2016 Musicounts Fred Sherratt award recipients announced”, Sherratt said, “It’s such an honour to celebrate and be a part of these awards. It was inspiring to see so many promising young graduates gaining insight from industry leaders who have made a great name for themselves in the music world. I know there is a bright future ahead of all 12 recipients.”

According to a press release, MIA program co-ordinator Steve Malison had nothing but good things to say about Reyno’s time at Fanshawe.

“He constantly put in the long hours to hone his skills and is a well-spoken advocate of artists and the music industry. As a faculty, we are pleased to have Nick Reyno win the Fred Sherratt Award for 2016!"

Reyno said the $2,500 award will go towards buying a new laptop, which he said will help him with his career in order to run all the recording programs that he said are required to stay competitive in the industry.

“The award definitely does a good job of helping bridge the gap, gain some momentum and get their feet wet in the industry. I think it’s going to help me down the road, and that’s what matters most.”

Reyno plans to one day work for an established studio in Toronto or in the U.S. He also aspires to work in audio post-production.