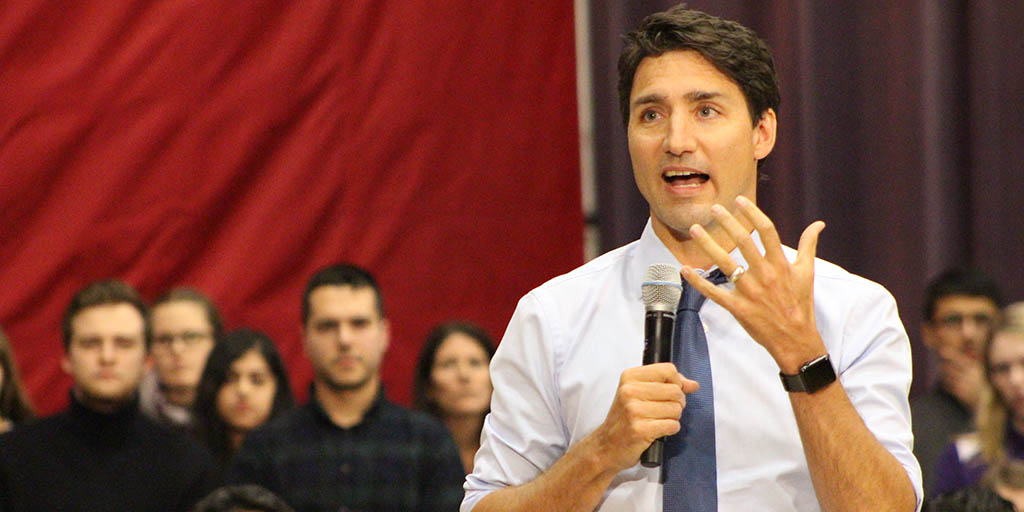 Prime Minster Justin Trudeau speaks with a packed town hall at Western during his cross country tour on Jan. 13.


In an attempt to have an intimate conversation with Londoners, Prime Minister Justin Trudeau brought his town hall tour to Western University on Jan. 13.

With such popular interest, the venue had to be changed twice to accommodate as many people as possible, and even then not everyone could get into the university’s Alumni Hall.

The crowd, which was a mix of people both young and old, was the largest crowd he had received on his tour at that time, which was roughly 1,500 people, and many more were turned away.

The crowd erupted once Trudeau took the centre of the room, which held a single chair and table.

Trudeau said his town hall was a chance for him to speak with Canadians and see how everyone both individually and as a country was doing, but that he wouldn’t have answers to everything being asked of him.

Trudeau proceeded to take part in an hour long Q&A style conversation, which dealt with questions all over the map, including an emotional plea for support for injured military veterans, mental health among youth and indigenous people, the environment and education, among other topics.

Surprisingly, there was no question of president-elect Trump raised, although Trudeau was compared to Obama. There was also little discussion of his stay at the home of Aga Khan, the billionaire Ismaili Muslim leader or of his recent cabinet shuffle.

There was a mix of criticism and praise for the PM, but few arguments broke out during the evening.

However, Trudeau did have to quiet the crowd down so those speaking could actually get a chance to be heard.

The night overall seemed to be calming with security, including the RCMP and sniffer dogs making sure everyone was on their best behaviour.

One rather amusing moment was when he took a question from the top of the bleachers for the room and mistook a Western University sweater for a Harvard University one.

“You guys know just as well as I do, Western is the Harvard of Canada,” Trudeau said to quickly back his mistake up.

Overall the night went well considering the late notice in venue change, and Trudeau answered all questions, though perhaps not the way the audience would have liked.

“I thought it was a great opportunity for Londoners to hear their prime minister outline his vision for the country, but a vision that is in response to the questions that he heard from the audience,” Fragiskatos said. “This is a prime minister that truly engages with Canadians, listens to Canadians. That’s what this is about it’s about democracy. He’s come to London, Londoners have heard him, and he’ll be back of course.”

Fragiskatos said he knows Trudeau loves Western and has been to Fanshawe as well.

“For me it’s a great opportunity to see that in motion. I know the prime minister spoke about the importance of post-secondary education, about youth tonight, and in fact that was a theme that was raised, so it’s something that I think this city will remember for a long time.”

“I thought it was really great, he was able to take on some difficult questions, even some questions that might have put him in a corner or questions that were critical of his performance thus far,” Ruston said.

Ruston said it was great to see such a large turnout including Mayor Matt Brown, Deputy Premier and MPP for London North Centre Honourable Deb Matthews.

“It was really important for me to come tonight to bring forward the youth voice and remind Canadians that youth are not only the future, but we’re here, we’re now, we’re the present,” Ruston said. “Gone are the days where youth are stagnant, youth are at home watching TV. We’re here, we’re ready to make a difference.”