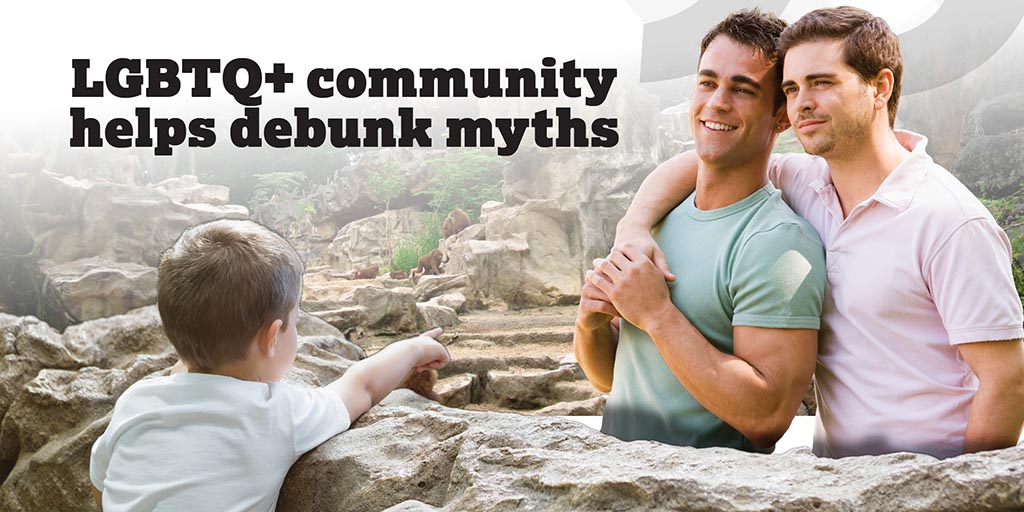 
Stereotypes and myths are never something you should ever immerse yourself into because they not only make yourself look uneducated about a given topic, but they can be damaging to those that are targeted. Boxing people into one category or another is not the right thing to do, and can leave someone feeling alone, left out, different or unaccepted by others. It can be difficult not to put people into specific categories, mainly because it happens every day to many different people; however ,for the LGBTQ+ community, it happens far too often than it should. One might not mean to put anyone, including the LGBTQ+ community within a specific myth and stereotype, but it does occur and can be quite damaging to them. While society as a whole seems to have a grasp in understanding the LGBTQ+ community, there needs to be better understanding that one’s gender and sexuality are two separate concepts. Therefore with more education and learning, hopefully people can understand that they need to get past the suggested stereotypes and myths and start listening and learning

There is a ‘gay/lesbian’ look

Fanshawe Student Union (FSU) president Carlie Forsythe, who also identifies as a lesbian, said that there is no specific look for those who identify as gay or lesbian. “Your sexual orientation is not visual. It can be, it can be a style, but it doesn’t have to be,” Forsythe said. Forsythe said if a person is going to box lesbians for example, there are many different types including butch, soft butch and the lipstick lesbian for example. The latter being an interesting one because this falls under women who are lesbians, but do not “look” it. “There’s no specific look, you don’t have to look a specific way to be gay, it comes from far more, it comes from inside,” Forsythe said.

Who’s the man/woman in the relationship?

According to Forsythe, that simply comes from existing cis-gendered, straight stereotypes and is not necessary to be in a successful relationship. As an example, both Forsythe and her girlfriend play many different roles in their relationship, such as rotating who is essentially the bread winner in the relationship, along with cooking and cleaning. “There are no specific set up rules, there does not have to be,” Forsythe said. Forsythe mentioned when she was growing up, there were no specific roles in her house catered to each gender.

Forsythe found this question to be hilarious, but said it’s not really a myth because people do tend to have a preference.

“That means on top you’d rather give and maybe receive later, if you’re a bottom you’d rather receive then maybe give later. If you’re switch, it doesn’t really matter,” Forsythe said.

Bisexuality is an experimental phase

A bisexual women, who wishes to be left anonymous, said that even though she likes both men and women, it does not define her as a person. “Just because I am interested in both men and women does not mean that my morals are compromised. I’m still very much engaged with the person I’m with,” she said.

She also hates that bisexuals “don’t exist” and are just confused individuals who are not sure what they want. She does not like how others in general think that this is just a phase and would get over it. “I’ve been bisexual since I was 14-years-old, I came out to my best friend in grade nine. It just never changed,” she said. “I’m physically attracted to either sex, but when I am in a relationship with a person, I am in love with that person, I am focused on that person, that is my relationship. I’m not going to be looking around because I have twice as many people to look at. It’s a double standard, people don’t believe that kind of thing.”

“That has a lot to do with the way gay men get portrayed in the media. When you see them in TV shows, their relationship status is always linked to their identity and who they are, but I don’t think that’s the case. It’s a part of who you are but not your defining characteristic.

Discrimination within the community

“The one thing that I think really annoys me about the gay community is that people are always trying to categorize you into a certain kind of gay, like tribes, such as the bear or the jock and people are always trying to pigeon hole you into that. I don’t like that because it makes you feel like you have to conform to those stereotypes in order to fit in within the gay community which is really weird because you’d think as a group that has been so discriminated against and marginalized, you’d think we’d stick together, but there’s still is so much discrimination within the actual community,” Kaisar said. Kaisar said one does not have to fit into any of those categories to be gay.

What really annoys Kaisar is when gay men get invited to girl’s night all the time and get pigeon holed into thinking they only like feminine drinks and girl’s night, but that is not the case. Gay men can like sports, play sports and enjoy having a beer. “Yes it’s fun and I may enjoy having wine with my female friends every once in a while, but it’s not something I want to do all the time,” Kaisar said.

Forsythe did have some additional remarks to make in terms of the LGBTQ+ community and any myths or stereotypes that arise around them. “It’s not a lifestyle, it’s a sexual preference. Being in a gay or lesbian relationship or whatever you want to call it is literally the same as being in a straight relationship, just different parts,” Forsythe said.

In terms of HIV and AIDS, it’s not something only the LGBTQ+ community may contract.

With any bullying that may occur, Forsythe said it’s more so of ignorance and it’s best to simply ignore it. Kaisar said that for anyone struggling with their sexuality, especially youth, that it does get better.