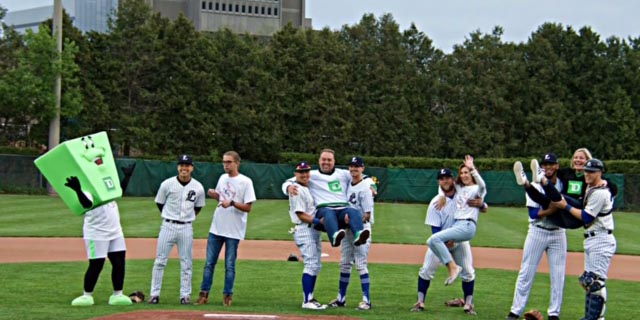 CREDIT: RJ ROSE PHOTOS
The London Majors created the #ALSLIFT for the "Give a Lift for ALS" campaign during their Kim Lewis ALS Canuck Day game at Labatt Memorial Park on May 19.

The London Majors played more than their usual game against the Hamilton Cardinals on May 19.

The team, along with the London community and those nearby played an important role in helping to raise funds and awareness for amyotrophic lateral sclerosis (ALS) Canuck campaign and those affected by the disease.

ALS, also known as Lou Gehrig's disease affects motor neurons in the brain that give nerve signals to the muscles, which limits muscle activity. The disease can be rapid and can change a person's ability to function on their own.

The event called the Kim Lewis ALS Canuck Day at Labatt Memorial Park, honoured Kim Lewis, who is currently battling ALS, but has devoted her life to fighting for the advancement of adult stem cell research in Canada and is an executive member of Canada's leading national ALS Charity, the Adaptive Canuck ALS Foundation, according to a London Majors press release.

The game and event included some key players including the London Majors and TD Bank among many others.

There were t-shirts and accessories dedicated to Lewis and ALS Canuck, as well an information booth to help better educate raise the awareness of the disease and ALS Canuck in itself.

Lewis' husband threw the first pitch of the game, and afterwards, London Majors players demonstrated how to make a simple and easy way to make a difference for those affected by the disease.

The players showed the “Give a Lift for ALS” campaign, which challenges teammates, co-workers, friends and family to creatively lift someone up, pose for the camera and post it to social media using the hashtag #ALSLIFT, and alslift.org in the caption and then nominate three others to do the same, the press release said.

The concept is similar to that of the ice bucket challenge from a few year back, but this bigger and better and is all about raising awareness and funds, according to Fanshawe's own Brent Arseneault, the emergency planning, fire and life safety specialist with Fanshawe's Emergency Management Office (EMO) and the brain behind the initial game idea.

Arseneault is a friend of Lewis and knew he needed to do something to help her and the family, along with others living with ALS.

“The family is just salt to the earth, to say the least. The nicest people you'll ever meet,” Arseneault said.

According to Arseneault, Lewis previously participated in the ice bucket challenge for the disease, and roughly 12 months ago was diagnosed herself.

After seeing how the family was raising funds and awareness for the disease, he had an idea of his own.

“I thought I could better utilize my connections and do something bigger and better and to get more awareness out,” Arseneault said.

Arseneault acknowledged how much people showed their support and were one board right away.

“It became kind of a heartbeat in its own,” Arseneault said.

According to Arseneault, this is the first year for the event, but he has intentions of making it an annual one.

“It's just nothing more than getting more awareness out for ALS, obviously raising money is kind of a key factor. It's kind of three tiers, raising money for ALS Canuck, an awareness to ALS and then the third part is just for the families who are dealing with ALS to actually go out and have a fun night together as a family, where they don't have to worry about anything fund raising wise, we're doing it all for them.” Arseneault said.

Arseneault emphasized how amazing the event's partners and community were in being able to pull everything together in roughly one month's time.

Angela Keating, marketing manager for the London Majors said that though the baseball team typically has charity event games, this one was different since it was at the beginning of the season, something that generally doesn't happen.

Keating pointed out that this gave the chance to draw in more fans to an early season game, which would then be an educational and emotional aspect for more people to learn about ALS and ALS Canuck.

“[TD Bank] ultimately liked to promote the cause and make sure everyone is aware of it, but also to launch the new charity or the new campaign,” Keating said.

Newcomer to the London Majors team Robert Doyle, who plays pitcher and outfield was supportive of the event and what it means for those fighting the disease.

“I honestly think it's a good thing to raise awareness [and] it's always good to be raising money to help for more research and finding ways for a cure,” Doyle said.

Doyle also likes the idea that the London Majors are community driven and want to help educate and bring awareness to different diseases as a whole.

“We have a pretty decently large fan base, and it's always good to get that out there because there may be a lot of people who don't pay attention to that or really know what the awareness is. By us showing our support maybe it will get all those other people on board too,” Doyle said.

1
Why the 2021 Toronto Blue Jays were the most exciting Jays team since '93
2
Ukraine, a friend, and the riddle of injustice
3
Fanshawe men's baseball team takes bronze at provincial championships
4
Breaking racial barriers in sports
5
Why do we cheer for the underdog?