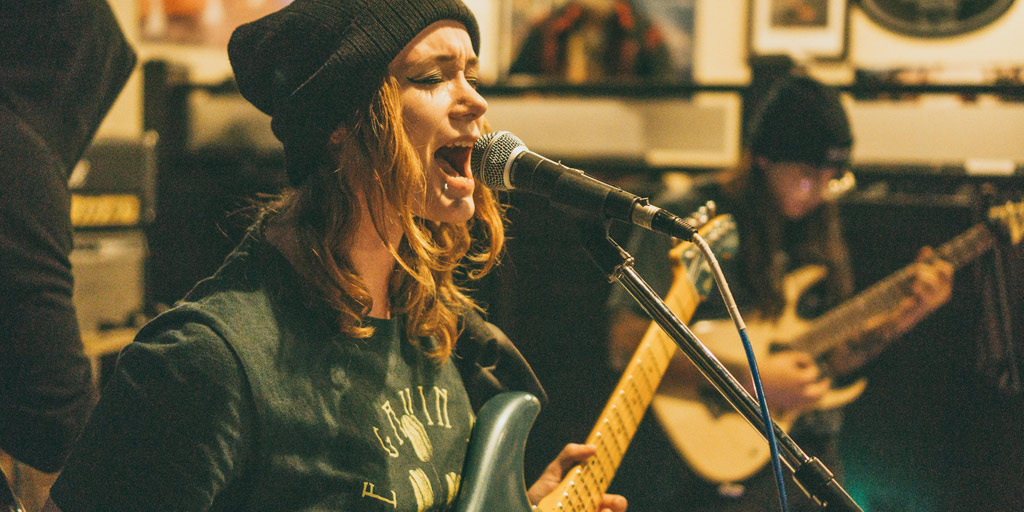 
The post-hardcore, math rock band known as Sweet Toothe excitedly announced the release of their debut self-titled EP earlier this month. The group consists of Fanshawe’s Music Industry Arts (MIA) grads Molly Roach on vocals and rhythm guitar and Jonathan Midence on lead guitar, as well as David Goodman on bass guitar and drummer Mitchell Clark, who is currently in his second year of MIA.

The initial concept for the group came to be when core writers, Roach and Midence found similarities in their writing styles after meeting in first year.

“We watched each other perform in class [and] noticed we had mutual interest; we both used a lot of jazz chords. [Roach] bugged me to jam and eventually we paired up in performance class. From there we slowly combined our influences and drafted a band idea,” Midence said.

Roach, who was already quite the veteran songwriter through a solo career, told how she was inspired to uncover as much as possible about math rock music after seeing Midence’s band Species of Trees perform.

“I had never heard of that genre before and wanted to learn more. I have always wrote music with the thought of, how can I make this as interesting as possible to tell a story and have catchy vocals. This intrigued [Midence] so we talked about a concept for our EP,” Roach said. “We wanted to combine my vocals and writing style with the bands influences and to push each other to try something new.”

With a band finally together and the songs fleshed out, the group set to work, independently recording the EP in Fanshawe’s recording studio facilities.

“We tracked everything at the Fanshawe College Music Industry Arts studios,” said the band, telling how they would often manage to grab extra studio time when other students didn’t show up for their assigned slot. “It helped us learn a lot and apply what we learned in school.”

While on the topic of Fanshawe, the group mentioned the major impact that the school had on their band, beyond simply the formation and recording of the project.

“MIA has taken our ambition and given us a well-rounded background of business, media marketing, performance, audio engineering and the ability to approach our music on a professional level,” the band said. “It allowed us to take our big goals, turn them into manageable goals and then [a] reality. We created a work ethic and learned how to push ourselves to accomplish those set goals.”

After receiving some recording and editing help from their classmate, Spinny, and completing all the tracking, the group enlisted the help of local audio engineer Kyle Ashbourne to mix the album. Finally they sent the mixes to Fanshawe’s MIA program coordinator and JUNO winning engineer, Dan Brodbeck, to be mastered before release.

Now that the EP is finally out in the world, the group shared how rewarding it is to see the positive response after all their hard work, anticipating that interest in their music will continue to grow.

“We pushed our boundaries and we have seen some of what we can do when we really put everything into a project. We are most excited about the potential of where we can go,” the band said. “Our music is so unique and special to us that we believe others will feel the same.”

Those interested in hearing the unique and captivating sounds of Sweet Toothe can head over to any major streaming platform such as Spotify or Apple Music. A tour is currently underway to promote the EP with stops all over Ontario. More info on upcoming shows and other news can be found on the band’s Facebook page at Facebook.com/SweetTooTheBand.