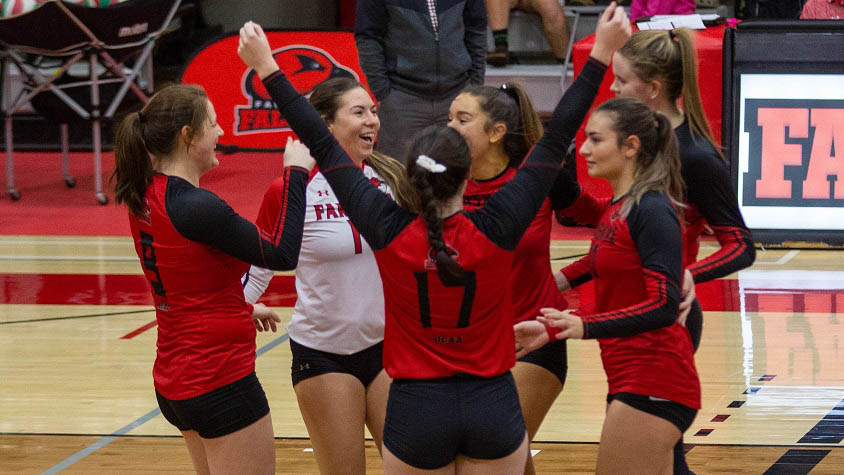 There’s a lot on the go for the Fanshawe Falcons’ men’s and women’s volleyball teams on the night of Jan. 22.

In their third game of the new year, each team will step up to the net with their own objective: the women must maintain their 34-game Ontario Colleges Athletic Association (OCAA) winning streak, while the men must come back from their defeat by the Conestoga Condors in the previous week.

On Jan. 16, the men’s team (5-6) lost to the Condors (8-3) in three sets. According to a Fanshawe Athletics press release, the teams exchanged points in the opening set, with the Falcons scoring points from Ewan Mason (recreation and leisure services). Mitch McFadden (electrical techniques) also made some major headway, but Conestoga pulled away at the end of the frame to take the first set 25-21.

The Falcons held a mere 2-point lead through the second set with hits from Daniel Ridings (construction engineering technology) and Luke Blissett (bachelor of commerce), but the Condors bounced back to take the lead and the set 25-33. They then took the third set 25-18 and took a 3-0 victory over Fanshawe. The top performer for the Falcons was Mason with 14 points.

That same night, the No. 4 nationally ranked women’s squad (11- 0) finished with a three set victory over Conestoga (2-9) at home. The Falcons had an early lead with a service ace from middle Skylar Johnson (nursing), followed by a tip from Mattea Deleary (bachelor of early childhood leadership).

Captain Janelle Albert (business – marketing) clinched the set midway through with a massive kill that put the team up 18-11. They won the first frame 25-16.

The second set saw a strong hit from Katie Stewart (fitness and health promotion), giving the Falcons a 9-2 lead. Libero Lauren Reycraft’s (business - marketing) dig set up a kill from Lauren Vahrmeyer (business) that continued the lead, and ended the set with 25-9.

The momentum continued in the third set when Ashley Rafferty (business) set up Albert for another kill. The Condors and Falcons traded points up until the middle of the frame, when the home team took the lead again with a five-point run. They won the final set 25-20, and the match 3-0.

The Falcons’ volleyball teams will be home for the next two matches, hosting the No. 14 Redeemer Royals on Jan. 22 and the Humber Hawks on Jan. 25.

This article was written on Jan. 22.