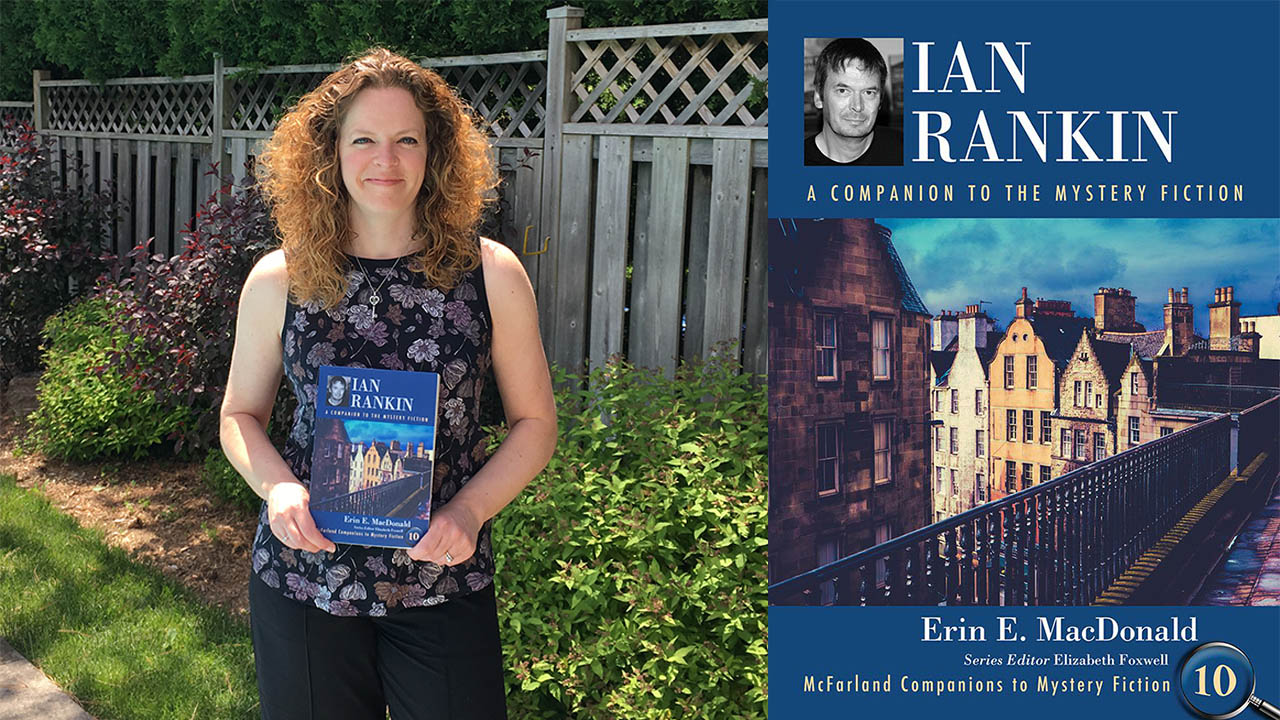 CREDIT: PROVIDED BY ERIN MACDONALD
Fanshawe professor Dr. Erin MacDonald was nominated to the prestigious Edgar Allan Poe Awards for her book Ian Rankin: A Companion to the Mystery Fiction.

Dr. Erin E. MacDonald, a School of Language and Liberal Studies professor at Fanshawe College, has been nominated for the prestigious Edgar Allan Poe Awards for her 2020 book Ian Rankin: A Companion to the Mystery Fiction (McFarland, 2020). She was nominated in the category of Best Critical/Biographical book. The book, which is part of the McFarland Companion to Mystery Fiction Series, is the first to provide a complete look at all of the writings by Scottish crime fiction author Ian Rankin, creator of the critically acclaimed Inspector Rebus series. Rankin also is the subject of two other titles by Dr. MacDonald: Detective Inspector John Rebus: An Investigation into Contradiction (Intellect Ltd, 2015) and Ghosts and Skeletons: Metaphors of Guilty History in Ian Rankin’s Rebus Series (McFarland, 2015).

Interrobang spoke to Dr. MacDonald about her nomination and more:

1: What was your reaction when you first learned you were nominated for the EAP Awards?

I was somewhat shocked though pleasantly surprised when Ian Rankin sent a tweet congratulating me on my nomination, as I had no idea I was being considered. I feel very honoured to be a finalist in the Best Critical/Biographical category because academic books don’t often get any attention in the press and because the writers I am nominated alongside are fantastic at what they do.

I was hired at Fanshawe in the summer of 2005 and defended my Ph.D. dissertation that fall. It was on the mystery writer Ed McBain’s 87th Precinct series, and shortly after that, I began writing a companion book on him. Ever since I started teaching at the college, I was designing courses that had a crime fiction or pop culture slant to them, both because I enjoy those topics and because I know that students do, too. Ever since then, I’ve brought stories by authors like McBain and Rankin into courses like “Crime Stories” and “Murder and Mayhem.” The more I research and read and learn about crime fiction, the more I want to share my love for it with my students. I also teach many writing courses and I think it’s good for students to hear that writing can involve a lot of time and editing, but it can be really rewarding, too.

3: I saw on your website that among your other publications there are two more titles about Ian Rankin’s work. Can you explain how your relationship with Ian Rankin started and why his work is so important to you?

When I was in grad school at the University of Waterloo, I realized that if I was going to complete my degree, I would need to study something that I really enjoyed, not just something that others thought I should study. I started out with the idea of writing about the homicide detective in general, and Rankin was one of the authors I was going to look at, because I enjoyed reading his books. I soon realized that was too broad and narrowed my focus to only McBain, but I kept reading Rankin. I’ve always been interested in policing, since my father was a police officer in the RCMP and later a Chief of Police, and I’ve always been interested in Scotland, since about half of my ancestors came from there. Rankin’s works combine those two interests and they also bring in literary references and social commentary that, in my opinion, elevate them beyond the stereotypical category of “genre fiction,” a label I don’t necessarily agree with. Popular culture can often reflect and critique society at the same time.

4: Are you working on any other new projects? If so, what your readers should expect from Dr. Erin E. MacDonald?

I’m always writing something! Even when I think I should take a break, I can’t seem to stop for long. I dabble in poetry and fiction as well, but right now I’m working on a genealogical article about my family history and I also have another book in the works. If it turns out as planned, it will be a collection of essays on the idea of “Outlander as Crime Fiction.” Most people have heard of the Outlander TV series but not everyone knows that it’s based on a series of novels by Diana Gabaldon, or that she also wrote a spinoff series about the character Lord John Grey. In those stories and novels, Lord John acts as an amateur sleuth, solving crimes in 18th century Britain. I’ve written about works set in modern times, so I think it will be a nice challenge to do something slightly different now. I also admire the novels of Ann Cleeves (another British mystery writer) and would love to write something about her one of these days.

The award is presented by The Mystery Writers of America (MWA) annually and this is its 75th edition. The celebration will happen on April 29, 2021. To learn more about Dr. MacDonald (and buy her books) visit her website: erinemacdonald.com.
Awards Books Dr. Erin E. MacDonald Fanshawe Faculty