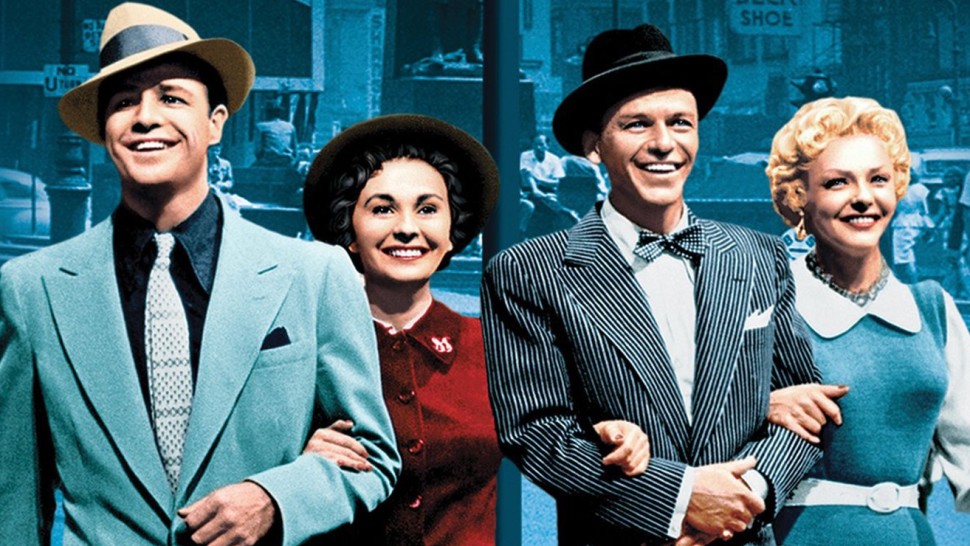 This week I am sharing my thoughts on the1955 movie musical, Guys and Dolls.

Guys and Dolls is about a group of gamblers in Manhattan. Skye Masterson is challenged to take a young missionary to Havana, and he finds himself falling in love with her. Now before I get into more detail about my thoughts on the film, I’d like to say that I have been in a production of the stage play, so I do know the plot. Therefore, I will be focusing more on the cinematic experience and effects in the film and discussing the actors themselves.

Young Marlon Brando as Skye Matherson is an absolute fox, and Frank Sinatra’s performance as Nathan Detroit is absolutely beautiful.

For its time, I feel like this film had a great representation of female characters. For example, we have Adelaide, who is a known performer at the Hot Box Club. She is very out there, whereas Sarah is a young missionary who is more of the conservative-type, but still very empowered.

I appreciate how both the main females have two different personalities and are vastly different from one another.

Within the first 40 minutes, there were already a few memorable musical numbers, like Adelaide’s Lament and Fouge for Tin Horns. What I enjoy most is that each song follows the individual characters’ storylines. For example, Adelaide’s Lament is about how Adelaide has been developing cold-like symptoms due to her body psychologically telling her she has a cold because Nathan will not marry her.

When Skye takes Sarah to Havana and gets her drunk, it is a bit problematic, but for the time this film was set in, I guess that was a bit more of the norm back then. Also, just from being in a stage production of the show, the film and the play are both different from each other.

Obviously in the cinematic universe they are able to expand more on storylines of the smaller characters. I felt like certain songs came earlier in the stage production and some songs did not happen in the movie at all. When Marlon Brando sang Luck Be A Lady, I swooned.

My favourite song from the musical has to be Sit Down, You’re Rocking The Boat because of the uplifting gospel feel it has to it. This song comes when they are attending a big prayer meeting close to the end of the film. This song is very upbeat and acts as Nicely Nicely Johnson’s confessional. The song leads to all the gamblers confessing their sins, which has to be one of the coolest scenes because it then leads into the wedding we’ve been anticipating of Nathan Detroit and Miss Adelaide, with a surprise wedding of Skye and Sarah. The ending of the film was kind of out of nowhere but overall I can say I enjoyed my experience.

The film itself is a little long but the pacing itself made up for it. It is very fast paced and keeps the flow of the story going, which I appreciate. Out of all the movies that I have watched, I think storyline-wise, this one had the easiest storyline to follow but also the dialogue felt very cliché.

Here's what you'll be able to do in Ontario starting Friday