Honouring Terry Fox, 41 years after his visit to London 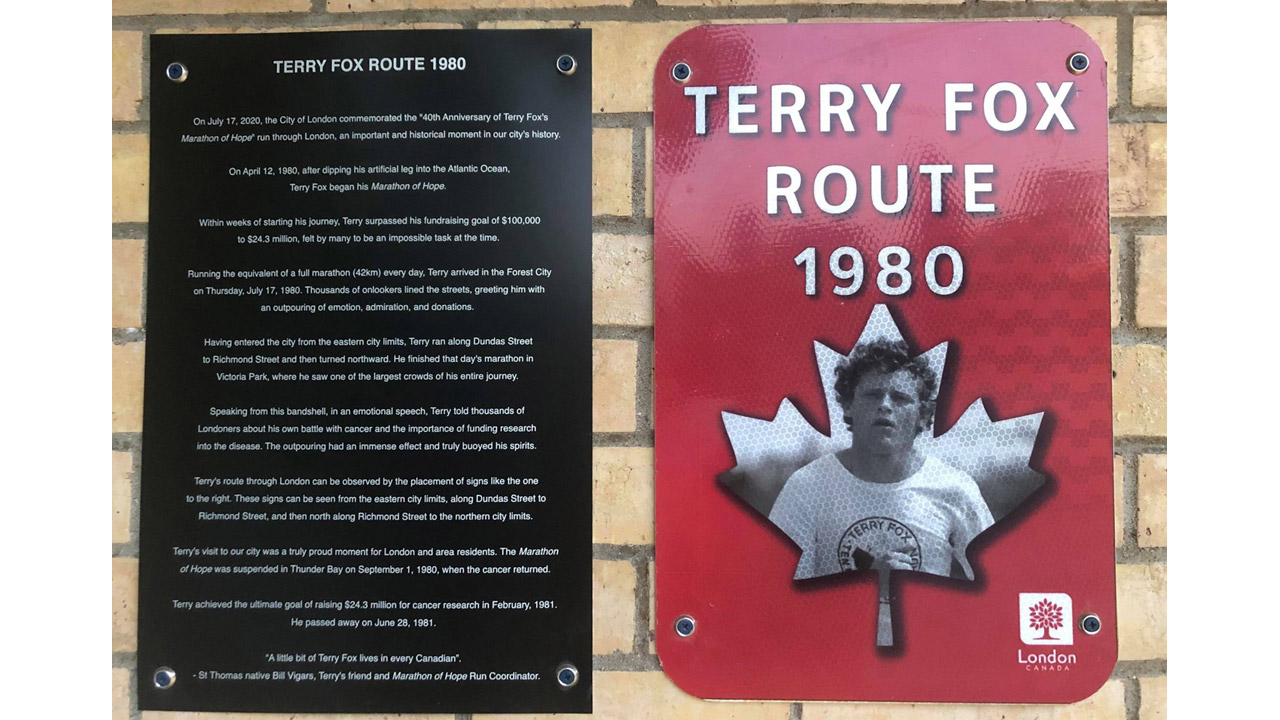 CREDIT: AISHA JAVAID
This year, the annual Terry Fox Run will be held virtually for the second year in a row on Sept. 19.

The plaque is in recognition of Terry Fox’s Marathon of Hope. The city decided to organize the production of this plaque in appreciation for London being a part of Fox’s run, 41 years ago.

“Instead of heading north and going straight towards Thunder Bay, where he ended his run, he [Terry Fox] took a bit of diversion and came down to London,” said Ferguson. “So, it would’ve taken a few days for him to run down here. London was proud to have been a part of the Marathon of Hope, especially because it didn’t necessarily had to have happened.

“It was here on July 17, 1980…. there was a lot of attention, it was really well organized,” he explained. “They organized for 100 other runners to join him at the end of Dundas Street. They all ran down through into the city, and so at that time he had gone past the crowds on the street and addressed people in Victoria Park. He had visually contacted a lot of people in London during his run, and all of that really left a mark on the city, people were very grateful that he had come here. I think people still feel a tie to having somebody of Terry’s stature make his way to London and talk to the crowd.”

The City of London and many committees dedicated to Terry Fox in the city have completed several different projects, memorializing Fox’s visit to London. One of these monuments is in Memorial Park.

“A few years ago, some of us…. brought up this really great idea, that we should have a memorial and he talked about statues and carvings,” said Ferguson. “So, they put out a tender for bidders who are artists and designers, and they came back with this idea of commemorating Terry Fox in the Memorial Park, that’s down on part of Terry Fox Parkway. Everybody agreed that that was a really good way to memorialize it.” Ferguson added that there is no limit on the number of ornaments honouring Fox, and that perhaps in the future there may be more ornaments around the city.

“We really don’t feel like we need to stop anywhere,” he said. This year, the annual Terry Fox Run will be held virtually for the second year in a row on Sept. 19. Graduate of Fanshawe College and now Olympic gold medalist, Damian Warner may also make an appearance.

“Damian Warner, he’s come to our run a few times,” said Ferguson. “I suspect we may be able to get him to come down, because he’s really nice fella but we’re also not going to have a real run.”

How we respond to humanitarian crises