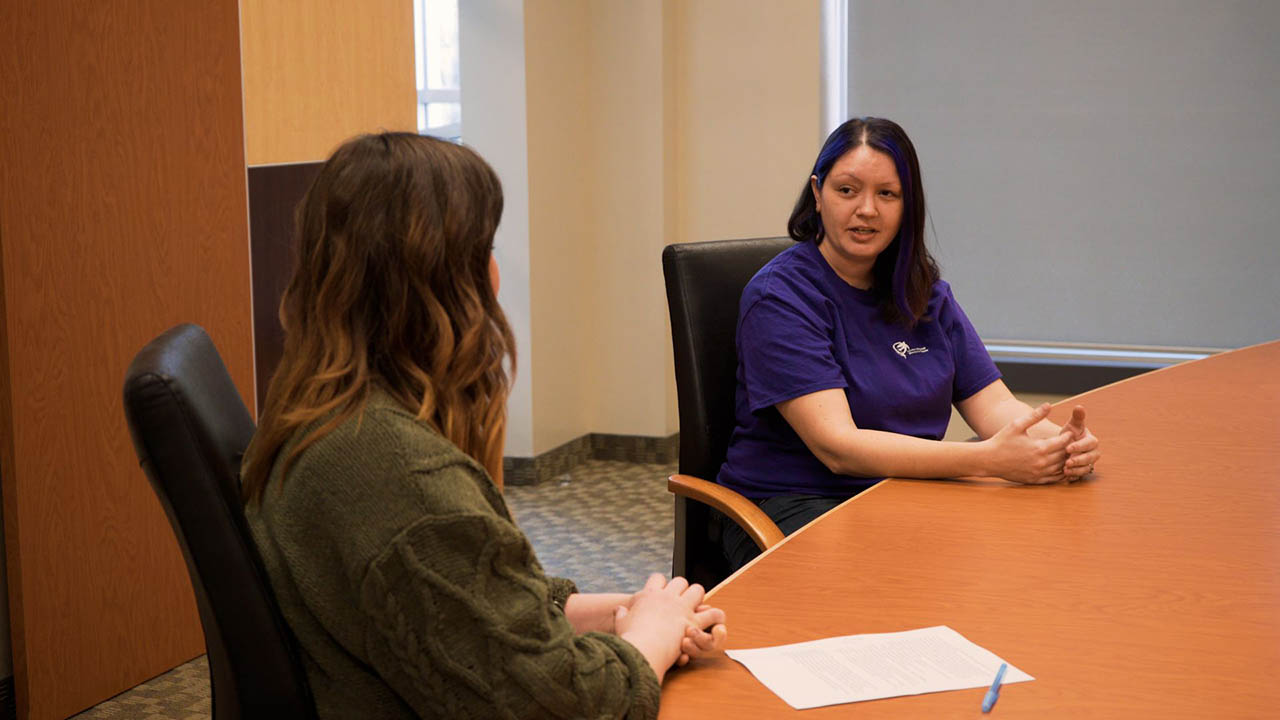 Credit: BRENDAN BEAMISH
Rebecca Amendola sits down with Interrobang to tell her story.

Every year during the month of November, the London Abused Women’s Centre (LAWC) organizes the Shine the Light campaign to raise awareness for violence against women. This year, the campaign has selected two Fanshawe students as honourees: Police Foundations student Shadia Keza and Social Work student Rebecca Amendola.

“It means so much that people who haven’t experienced [abuse] take time to have compassion and to raise awareness about the fact that it’s still a prevalent issue in society,” said Amendola about the campaign. “I was just so excited at the concept of a campaign existing where I could share my story, feel empowered sharing my story and empower other women and anyone who’s experiencing abuse to know you aren’t alone.”

Amendola was a repeated survivor of sexual abuse perpetrated by her adoptive father. But even before then, she was sadly no stranger to sexual violence.

“I grew up in a really complicated home, a single mother with multiple father figures, kind of coming and going,” she explained. “I was also neglected by my mother with all her own personal complications. And so that all led to a really deep need for emotional connection, which sadly, led to being really easily victimized by one of [my] family members.”

When she did meet her adoptive father, John at age 13, she was desperate for stability and financial support, and accepted his promises to take care of her. Before long though, their relationship would take a turn.

“Between 12 and 18 months after he took me in….well, before that, he started physically abusing me, telling me that it was my fault as a misbehaving child,” said Amendola. “In taking on that abuse and feeling like he was my ticket to a prosperous future, I then also took on the sexual abuse as simply a price I was willing to pay to get away from my environment that I grew up in.”

Amendola was sexually assaulted every day for six years by John. Despite suffering for years at home, Amendola graduated high school on the honour roll, began attending Western University and ultimately made the choice to move away from John. She maintained a distant relationship with her abuser, though, and soon began to learn that his harmful behaviour was beginning to put others in danger. It was then that she made the difficult decision to report her history with John to the police.

“It was my responsibility to report him, to help society in some way be more safe from the harm that he caused on a regular basis,” she said. Amendola admitted that at first, she didn’t report him with the intention of pressing charges.

“I actually first went and reported and I said, ‘I’m not here to ask you to arrest him and penalize him. I’m here to ask you to get him help. He’s clearly mentally ill, no mentally well person harms children. So can you just forcibly admit him?’ And they said, ‘no, that’s not what we do. We just charge him.’”

So what instead followed was a lengthy and “torturous” legal process that left Amendola disillusioned and exhausted. Amendola was present for all of the court proceedings, and watched on as John “exaggerated” his disability, faked Indigenous heritage, and pleaded guilty at the last minute, taking away Amendola’s chance to testify in court. In the end, her abuser was sentenced to five years in prison, and as much as this may have seemed like justice, for Amendola, it wasn’t enough.

“Even though he took six physical years of my life and then three more after that with the emotional abuse, he only was sentenced for five and he only served three,” she said. “And so, the time measure is very invalidating.”

Still, Amendola said she feels grateful she got a conviction at all, as they can be extremely rare in cases of sexual abuse. Between 2009 and 2014, just 12 per cent of sexual assaults reported by police led to a criminal conviction (Statistics Canada).

Today, Amendola is studying Social Work at Fanshawe College. She volunteers with the Sharing Shop and runs the Environmental Club. Although she said her healing journey is not yet over, she is optimistic that she can use her experiences to help others in her community.

“In terms of a career, working with people, and helping vulnerable populations was something that really made me feel empowered and it made me feel proud to work, to create.”

Keza, meanwhile, is a survivor of the Rwandan genocide, who now resides in Canada with her two children.

Shine the Light dates back to 2010, and encourages members of the community to paint the town purple in honour of survivors of violence against women. Purple has come to symbolize courage, bravery and the fight to end woman abuse. On Nov. 15, members of the community came together to wear purple as a show of support and solidarity for survivors everywhere. Purple lights can be seen throughout the month of November at Fanshawe College, and within the broader London community.

To learn about Keza and Amendola, as well as Shine the Light, visit lawc.on.ca.
Fanshawe students London Abused Women's Centre Shine the Light on Woman Abuse