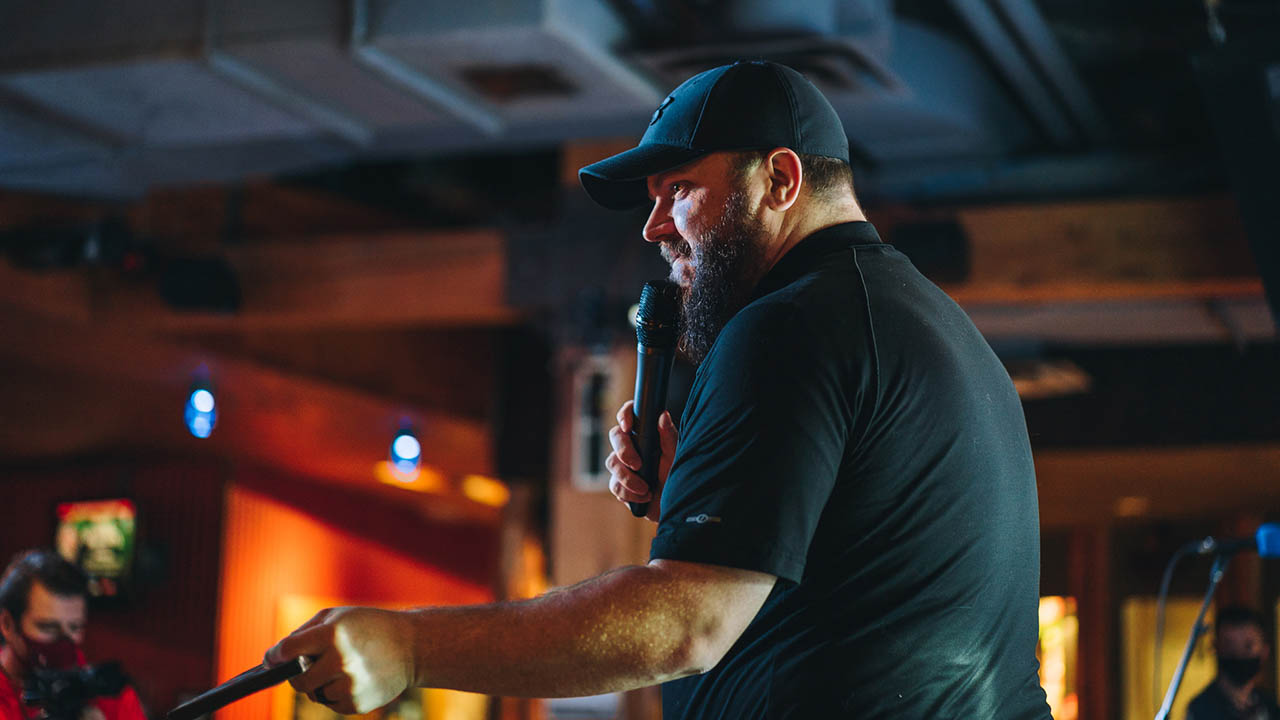 CREDIT: BRENDAN BEAMISH
The newly created role for Tyler Hetherington is a title shared by only three others across the country.

The Fanshawe Student Union (FSU) is creating a milestone by investing in the future of competitive gaming.

Tyler Hetherington is Fanshawe’s first Esports coordinator. As it stands, the U.S. has over 450 varsity Esports programs while Canada is slowly catching up. The newly created role for Hetherington is a title shared by only three others across the country. After working for the FSU as an events and activities coordinator, Hetherington pitched the idea to invest more into the world of Esports.

“The FSU is kind of being leaders in the field in this,” he said. “Really investing and going forward in the future with this Esports program. It’s amazing to see the FSU really believe in it and make it such a big pillar of our programming moving forward.

“I took the job as the events and activities coordinator about five years ago,” he added. “And the Esports program that it has now morphed into was something I pitched pretty early. It started off as weekly in-person tournaments, and it adapted to what it is today. Over 14 competitive teams competing collegiately, a lot of in-person events, a great community of over 1,200 Fanshawe students who are all super supportive of each other, and we just have events all the time.”

Fanshawe’s Ultimate Esports League, more commonly known as FUEL is a gaming hub for students to take part in discussing games, get involved with teams, and participate in tournaments. With the investment, Hetherington is looking forward to FUEL growing to become “bigger and better.”

“We even have tier two (T2) teams, which is students coming together to get better at the game. So, they could potentially play for one of our top-level teams. It’s a cool thing that’s been built, and it’s great that it’s gotten to where it is today.”

Esports team captain Adam Boyce said he was excited about the new role for Hetherington and what it could mean for the future of FUEL with upcoming projects.

“Canada is really behind on a lot of the teams in the U.S., they actually will have full arenas or centres that their teams play together on campus with,” said Boyce. “And I know that’s one of the projects [Hetherington’s] working on that everybody’s excited for because it’s just so much more fun to be able to play with your friends in the same room as them rather than having to play from your own home and talk to them over the phone or something like that. I know he has a lot of projects coming, and it’s really exciting to see him get this recognition that he needs because he’s put a lot of work into this program. I know it means a lot to him, and it means a lot to us.”

Ralph Constantin, a second-year computer programming and analysis student found his passion for gaming at a young age.

“I started gaming when I was five years old,” said Constantin. “I got a [PlayStation 3] and found out about online gaming. That’s when my strong interest, or should I call it addiction, in gaming started, especially competitive gaming. My first competitive game was Call of Duty: Black Ops 1. That’s where I grew a strong interest in first-personshooter (FPS) games. That lead me into winning a national Call of Duty: Black Ops 2 tournament in Lebanon when I was 14 years old and being deaf and young, was impressive at that time.”

It was inevitable for Constantin to continue his passion and talents of online gaming with FUEL.

“My teammates have been super supportive and open to playing with a deaf player and believe me, in the gaming community this isn’t always the case. FUEL really changed my perspective on gaming, and I can honestly say it has made me a much better player.”

In celebrating the community Hetherington built, Constantin, like many members, of FUEL recognize the hard work Hetherington has put forward.

“Esports has really exploded over the last few years and it’s because of hardworking people like [Hetherington],” said Constantin. “It is so incredible to see that Fanshawe recognized that too and gave him that position. I didn’t know that this title is so new and rare, but after seeing all the work he put into developing FUEL and always coming out and supporting our games, I can say he really deserves it. He’s putting Fanshawe on the map in the Esports community and I’m really so grateful to be a part of it.”

As the Esports community evolves, there are numerous ways it can now help more students with their time at Fanshawe, including the ability to gather co-op hours. Esports at Fanshawe can now expand, according to Hetherington, by “a million times.”

“With the FSU making this investment in me as a solo full-time person, just for Esports, we have a chance where I can spend 100 per cent of my time dedicating myself to building this program and improving it every day,” said Hetherington. “That’s what we’re going to do and there’s going to be some big changes coming in January, and next September. It’ll look like a whole new program, which is fantastic. I can be a little bit more focused on Esports and developing the rim and building the community even more and more.”

Even if you’re not a full-time gaming addict, Hetherington said all are welcome to get involved.

“You don’t have to be a hardcore gamer to join the community and enjoy the community,” he said. “There’s a lot of people involved in FUEL that are casters, they’re producers, they’re content makers. They’re not playing the games, there are people just around in the community. Some people are just there to hang out in a safe space with similar-minded people.” Students interested in joining the growing community of gaming can find more information on fsu.ca/fuel.
Esports Fanshawe Student Union Video games