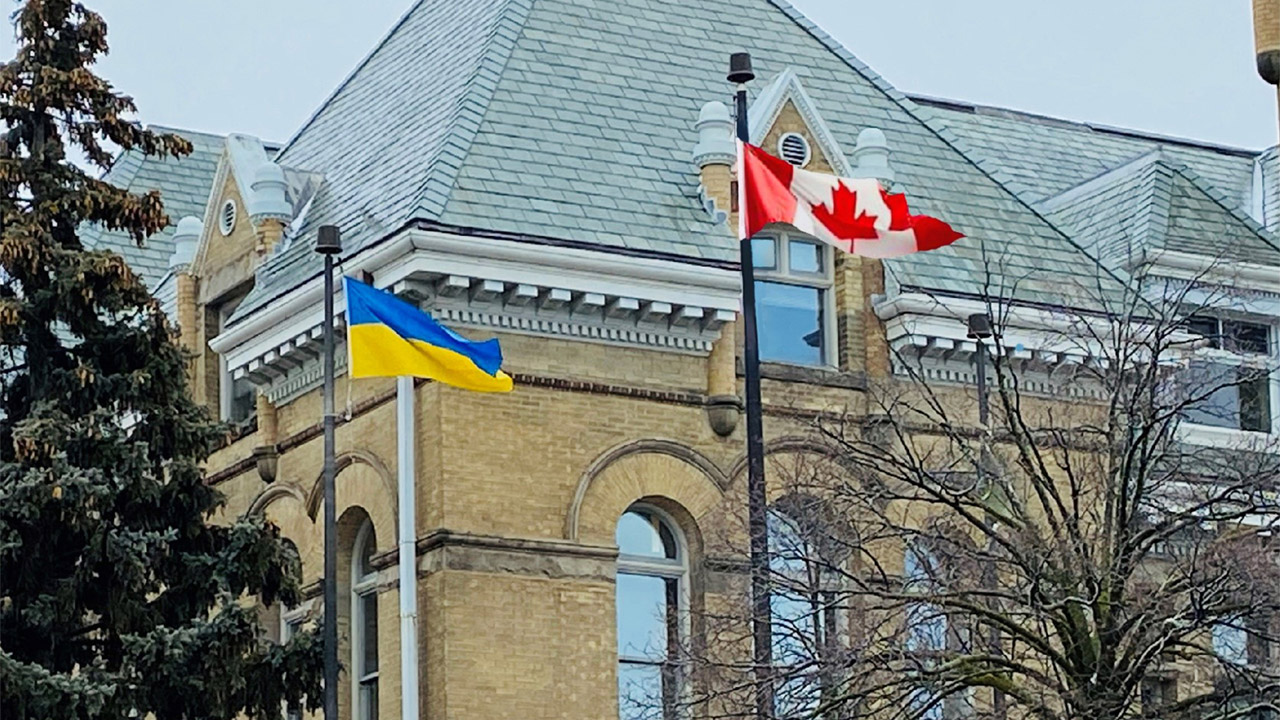 CREDIT: AMY SIMON
"How many more deaths and losses must it take to secure the skies over Ukraine?" said Ukrainian President Volodymyr Zelenskyy.

Russian President Vladimir Putin commenced the invasion on live television, saying that the goal of the assault was the “denazification” of Ukraine – an allied initiative used after the Second World War to rid German and Austrian society of Nazi ideologies.

Putin added that anyone trying to interfere “would be met with such consequences that have never been experienced in history.”

While the total death toll remains uncertain, the United Nations estimates at least 350 civilian deaths, but says that number could be “considerably higher” as the refugee agency reports more than two million people have fled the country.

Ukraine’s President Volodymyr Zelenskyy is calling for the boycott of Russian exports, particularly oil, and to impose a no-fly zone.

“How many more deaths and losses must it take to secure the skies over Ukraine?” he expressed in a video message.

“We didn’t think that Russia would attack,” said Stryhun. “But I guess there was always an enemy in the neighborhood.”

Stryhun said that everyday is like a “never-ending nightmare” with her family still back home in Ukraine.

“The only thing I think about is my family, friends, and my country,” said Stryhun. “But the London community has stepped up in supporting Ukraine, myself along with it.”

On Feb. 28, hundreds rallied at London’s Victoria Park in support of Ukraine. The protest was organized by Volodymyr Vorobets, the president of London’s Ukrainian Centre.

“We want to send a message,” said Vorobets. “We want to raise awareness, and we want our government to take a stronger stance and make faster options.”

Canada has since donated $25 million in defensive equipment to help in Ukraine’s fight for freedom. Immigration Minister Sean Fraser also announced that in seeking refuge, an “unlimited number” of Ukrainian’s can qualify for a fasttracked visa to work in Canada for up to two years.

Tatiana Dawidenko, vice president of the London Ukrainian Centre, sent her thanks through a heavy heart as support continues to be displayed across the city for her home country.

“You don’t know how amazing a city like London is until you see the support it’s people provide,” said Dawidenko.

Through tears, Dawidenko added that, “while these violent acts against my country are horrible, at least now the world knows how Ukrainians fight.”

For Stryhun, the shell bombs and acts of terror are only destroying Ukraine’s past identity.

“Even if they’re bombing us, those buildings were from USSR. We will build something new upon the ruins and we will create a new Ukraine.”

Once again referencing Fanshawe’s Ukrainian student population, President Peter Devlin highlighted that above all else, Fanshawe College is a supportive community.

“There’s wonderful care and compassion for each other,” said Devlin.

“More than anything else, I am horrified that Russia first invaded Ukraine,” said Devlin. “It breaks our hearts as we think about the people of Ukraine and the humanitarian circumstances. But we’re grateful that neighbours have opened their arms, facilities and resources.”

But as Russia’s attacks on Ukraine don’t seem to be slowing down, Marnie Wedlake, psychotherapist and professor at Western University’s Faculty of Health Sciences, said it’s important to manage personal feelings during times of tragedy.

“The threat of nuclear weapons means that this is no longer isolated to just that part of Europe,” said Wedlake. “This coming at almost the three-year mark of a global pandemic that has asked a lot of everybody emotionally.”

Wedlake said to “tune into yourself, see where you’re at, and see what it is you need in order to stay informed while not feeling flooded.”

So, as the world watches and waits for more updates on the situation in Ukraine, Londoners are raising their voices in support and solidarity as the phrase, “slava ukraini, heroyam slava (glory to Ukraine, glory to the heroes)” trends with each passing day.

The London Ukrainian Centre is accepting donations from 10 a.m. to 7 p.m. at 247 Adelaide Street South. Electronic money transfers can also be sent to info@nulllondonukrainiancentre.ca.
Russia Ukraine