Lie or die: Russia's use of propaganda 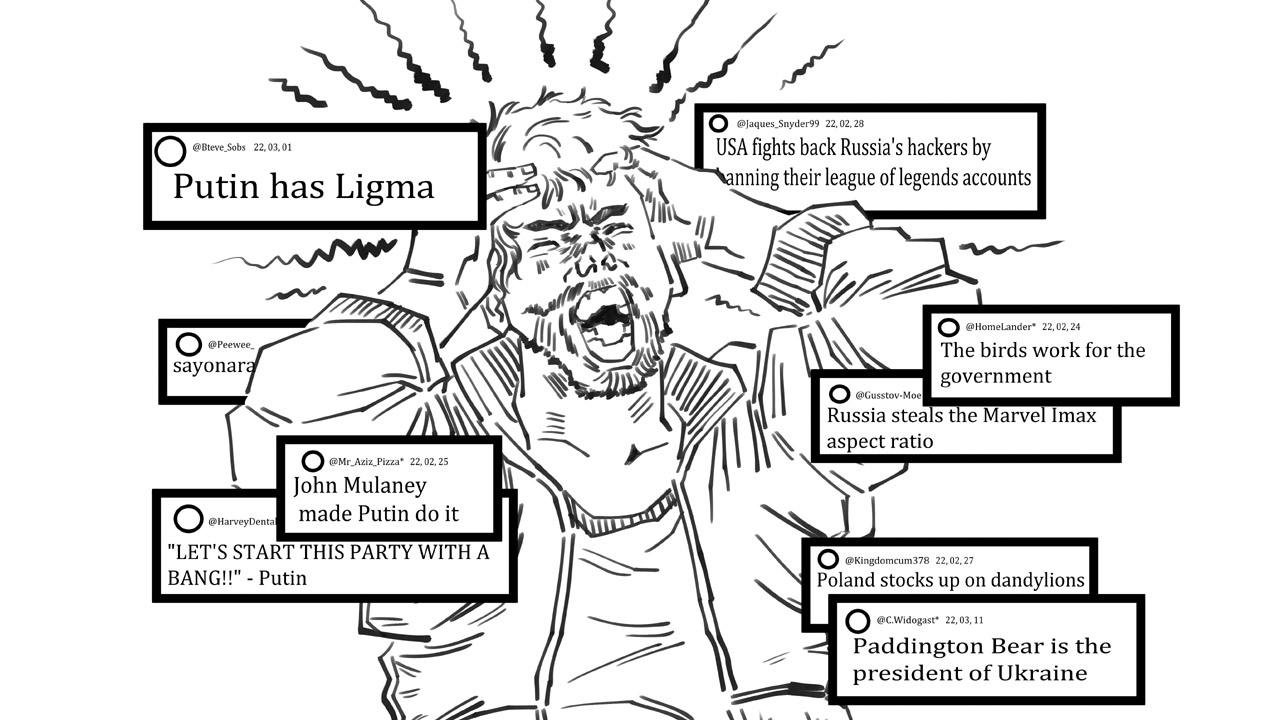 CREDIT: DYLAN CHARETTE
Now we see history repeating itself, as it always does. State-operated media in Russia is telling a different story to its people.

Propaganda. What do we know about it? Does it affect us at all?

We tend to think that living in an independent and free country, surrounded by open-minded people, we leave the lies behind. We certainly know who is wrong and who is right. At least, most of the time we do, but often only in our own neighbourhood, something that we see with our own eyes, that we can verify.

But in a modern world and with the development of the internet, lies are shared constantly. Misinformation generally doesn’t significantly harm a democratic society, where everybody can express their own opinion. But what if there is no counter-argument? In the case of Russia, any counter-argument is forever buried under the power of one arrogant puppeteer.

Do you feel free? What would you do if your expression was limited to admiring the current government? Digging deeper into the history of Russia, we can see that public opinion doesn’t exist. People were afraid for their lives, careers and families. We are all strong, but only till a certain time. Everyone breaks, you just need to push the right button. That’s what the government used at first to manipulate the people.

Opposition writer Vladimir Voinovitch described this in his book, The Life and Extraordinary Adventures of Private Ivan Chonkin: “Everywhere there was a kind of Institution, which was not so much military as warlike. For a number of years [Russia] waged a war of extermination against its own fellow citizens, and led with indispensable success. The enemy was numerous, but unarmed - these two constantly acting factors made the victory impressive and inevitable. The punishing sword of the Institution hung constantly over everyone, ready to fall in case of need or just out of the blue. This Institution has such a reputation that it sees everything, hears everything, knows everything, and if something goes wrong, it is already right there. That’s why people said: if you’re too smart, you’ll get ‘where you need to be;’ if you talk a lot, you will get to ‘the right place.’”

We all know that no matter how numerous the official oversight is, the worst enemy is sometimes your own neighbour. People turned into animals. I don’t blame them for it, they did it to escape from the same fate. Everyone watched everyone else, and the chances were high that you may have been subject to an anonymous complaint. There was a famous joke back in USSR:

“Here’s a mustachioed cockroach,” Marshal Zhukov growled irritably as he left Stalin’s office after a meeting of the State Defense Committee.

Comrade Poskrebyshev, hearing this, decided to report this to Stalin, who calls Zhukov to him right after:

- Comrade Zhukov, whom did you mean?

- How whom? Hitler of course!

Stalin turns to Poskrebyshev and asks with his southern accent:

- And you, comrade Poskrebyshev, whom did you mean?

The reason the USSR became so strong is that everyone just wanted to survive by suppressing others.

There surely were people who tried to bring light to the world of forever twilight. They shared handwritten books in the underground. They were called “self-publishers.” But even in the underground, there were eyes watching. Nobody could escape from the all-seeing eye. Imagine you are listened to and heard by everybody. Parents turned on their children and lovers turned on each other. And expressing opinion in public meant death. That’s why all “self-publishers” ended up in prison or “strangely dead.”

Now we see history repeating itself, as it always does. State-operated media in Russia is telling a different story to its people. According to Putin’s propaganda, causalities have been minimal as Russia “heroically” works to “de-Nazify” Ukraine. People are not blind, it’s just harder for them to accept the truth than to pretend it never happened. They protect themselves. They don’t have to bury 100 children in destroyed houses, see cultural objects disappear forever and cities being destroyed just for a sick idea of an obsessed dictator.

Maybe, they will never see. But justice will prevail. One day we will see the empire burning in its own hate and letting out all the spirits with their hidden stories.
Propaganda Russia

1
Ukraine: Heartbroken but unbreakable
2
Mental health amid the Ukraine and Russia war
3
Blindsided by evil
4
Life goes on: Why explaining the war in Ukraine is tiring, but necessary
5
Lament for the Russian Orthodox Church