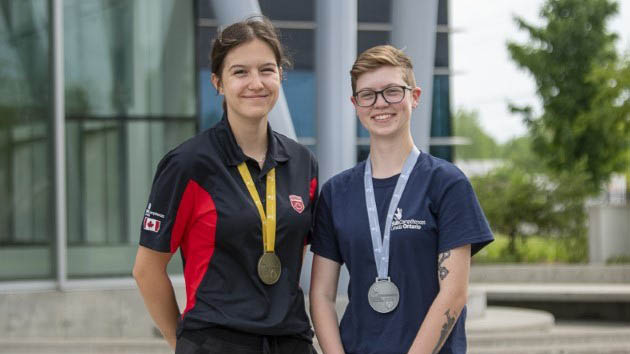 CREDIT: FANSHAWE COLLEGE
The two girls, who are soon-to-be graduates of the Auto Body Repair Techniques program won gold and silver medals at the 2022 Skills Canada National Competition, that was held in Vancouver last month.

This year was rich in events and victories for Fanshawe’s students in professional fields as well as in sports and other spheres of student life. For Abby King and Mikayla Racz, the school year resulted in important victories. The two girls, who are soon-to-be graduates of the Auto Body Repair Techniques program won gold and silver medals at the 2022 Skills Canada National Competition that was held in Vancouver last month.

During the competition in Vancouver, King won gold in the Autobody Repair category and Racz won silver in the Car Painting category, despite having relatively small experience in the field. This competition opens doors for the next big and small victories in the professional field. Their hard work and desire to learn got them to this victory, offering many possibilities for the future.

King and Racz started preparation only eight months ago. Through this short journey, the two managed to improve their skills to a professional level.

“Abby displayed natural talent for welding and sheet metal repair very early in the program, so she became a perfect candidate for the auto body repair competition,” said James Shaw, the Auto Body Repair program coordinator and one of the instructors for both girls.

Before competing on a national level, King and Racz had to prove their skills at the provincial level and at a program competition as well.

“Both Abby and Mikayla competed against a second-year apprentice to earn their spot on Team Ontario,” Shaw said. “[They] had expressed strong interest to compete early and took on any extra training as available throughout the two semesters of regular schooling, so the competition training was fairly easy for them and us.”

The program is popular among Fanshawe students, but is mostly frequented by men. Women winning this competition shows, that everyone, despite their gender can be good at doing what they like.

“We usually have a couple girls enroll in our program every year. This year we had 10 young women enroll in the Auto Body Repair Techniques program,” Shaw said.

Shaw assured that there’s no difference in training between men and women. Everyone can become a true professional just by focusing on training and learning, although natural talent and a strong desire to learn play a big role on the way to success.

Now King and Racz are planning their near futures. King has an apprenticeship lined up with Burwell Autobody, and will soon compete at WorldSkills. Racz, meanwhile, has been interviewing with employers.
Automobiles Fanshawe students Skills Canada WorldSkills

Mental health amid the Ukraine and Russia war