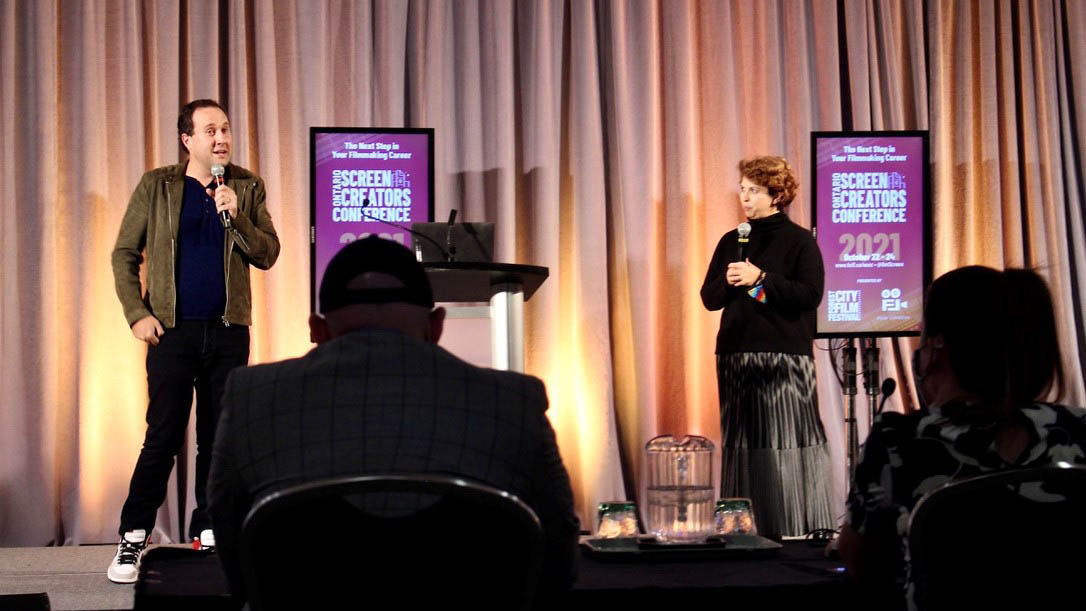 CREDIT: TAYLOR WESTBURY
Olga and Geordie Sabbagh give pitch their film Audit in front of the 2021 Project Pitch panel of judges.

Forest City Film Festival’s (FCFF) Project Pitch is back for another year. Project Pitch is a chance for an eligible Canadian filmmaker to receive additional funding for an upcoming feature-length production.

The Project Pitch winner receives a $30,000 cash grant as well as a $30,000 production package including a $10,000 grant for equipment and $20,000 for specific services such as scoring, sound effects, public relations, marketing, and more.

Dorothy Downs, Executive Director of FCFF said the grant and production package are helpful to both the winning filmmaker and the film industry in our region.

“With these prizes, we’re trying to help build the profile of people—the services providers in the industry in the London region and Southwestern Ontario,” Downs said. “We’re really working to encourage a culture of film appreciation in this region…and also to let our Canadian stories be told.”

The eligibility requirements for successful submissions include a specific minimum production budget of $150,000, a production team that is ready to film within 12 months of giving the winning pitch, as well as the completion of a previous narrative film that was selected by a major Canadian Film Festival. Additionally, 50 per cent of the film must be shot in London, Ont.

Given the minimum $150,000 budget requirement for a winning project, the ‘50 per cent shot in London’ condition is a boon for the region.

“If [the filmmaker] is spending $75,000 of their production budget here in London, then already it’s a win, but most of the films that come in are well over $300,000,” Downs said “Last year, all of the [finalists’] films that were pitched were over half a million dollars in budget size.”

Submissions are now open and FCFF members examine every submission made before the Sept. 10 deadline.

Six to eight filmmakers are selected to be Project Pitch finalists, and each are given the opportunity to pitch their film in front of a panel of judges and live audience at RBC Place here in London on Oct. 23.

Each finalist’s live pitch must be at least two minutes long and no more than four minutes long.

“We practiced a lot,” Geordie Sabbagh said. “It’s a lot of things to get through in four minutes—four minutes flies by…you need to know [your pitch] by heart getting up on that stage. Preparation is key.”

While the pitch is limited to four minutes, finalists are still able provide additional information requested by the judges during a question-and-answer period.

Sabbagh added that the experience of participating in Project Pitch was positive.

“All the people in the room really responded to the film,” he said. “A lot of people were excited to see [our film Audit] come to life, so, for us, it was sort of a two-part affirmation of the project…it gave us a big boost.”

1
Are primetime award shows over?
2
Summer Watchlist: John Wick
3
Electric Market returns to celebrate London’s top DJs
4
Why Dr. Strangelove is once again the movie of our times
5
The High School Project returns to the Grand with Into the Woods