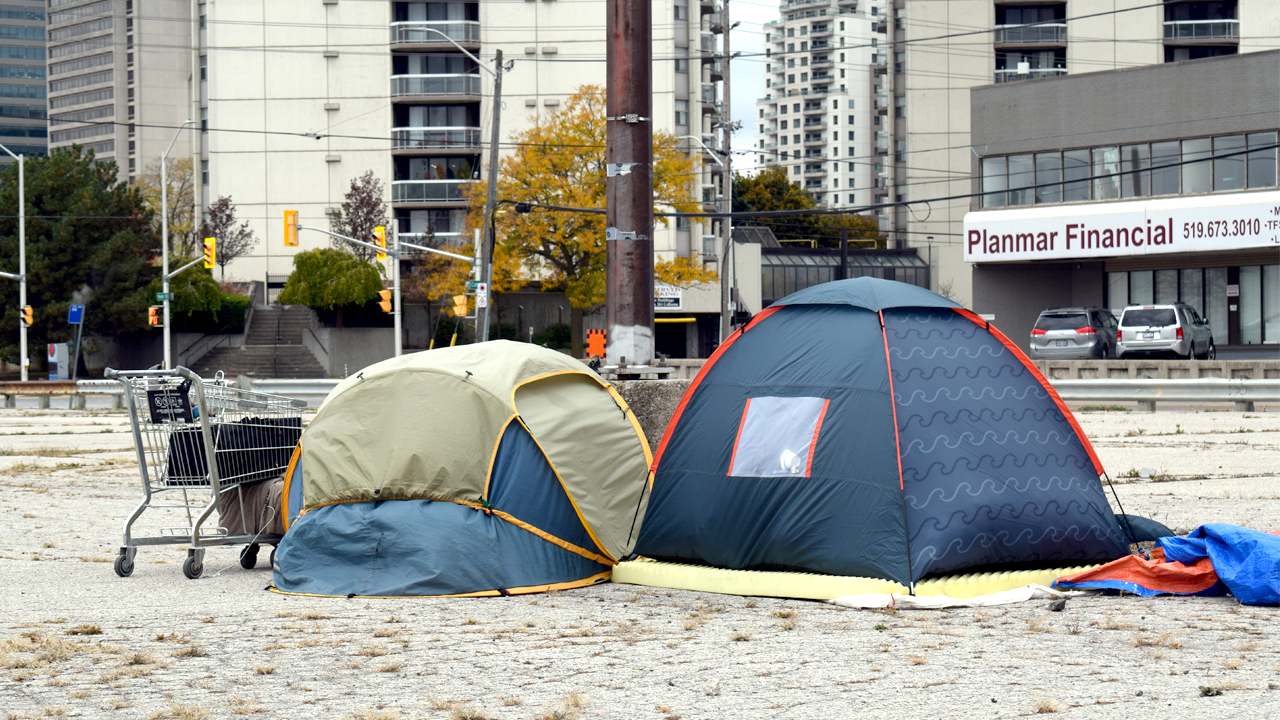 CREDIT: JUSTIN KOEHLER
Homeless tents located in downtown London, some of many that can be found scattered in the city.

The municipal elections have been a popular topic lately and have brought forward a hope to address some of the growing issues and problems in London. With local police recently dismantling one of the larger homeless camps in the city just off of downtown London, it’s easy to see why the homelessness crisis in the city is at the forefront of voters’ thoughts.

With close to 2,000 identifying as homeless in the city so far this year, increasing from last year’s total of nearly 1,400, many of this year’s mayoral candidates had the topic of homelessness within their platforms. The main cause for concern, however, is that the City of London has had plans for improving homeless numbers for years and the numbers are continuing to increase. This continued issue has now made its way further into the eyes of Londoners.

According to a study conducted by CBC London, over 50 per cent of respondents stated that homelessness and affordable housing mattered most to them when it comes to their vote. When issues such as climate change, crime, public transit, and taxes all combine for less than 30 per cent in the same study, it clearly shows how much Londoners care about the homeless population in the city. Among those who care are some of the students at Fanshawe College, having their own thoughts on what should be done to better the lives of those who live on the streets. Affordable housing, reopening or relocating soup kitchens, and additional food banks were all recurring options coming from the students of the college who were asked about recommendations they’d give to the next mayor of London on improving the lives of the homeless population.

“To best aid the homeless population in the city we need to look at more affordable housing,” said one student currently enrolled in the paramedic program at Fanshawe. “We also need to look at allowing people who have addiction issues to be able to live inside of group homes, so that they can have somewhere safe to hopefully get better with their addictions instead of just throwing them out on the street.”

Alanna, another student enrolled in the paramedic program, recommended more allowances for homeless camps in the city.

“In Kitchener, we kind of set up a large tent area where all the homeless people can stay and have a place to sleep.”

Another student, Selena, echoed that sentiment.

“Just increasing the availability of shelters,” she said. “I know every time I pass Mission Services downtown, there’s lineups around the block for it. I’d recommend just giving them shelters that are more readily available, so they aren’t sleeping on the streets at night.”

Homelessness is very present in London, being an issue that’s been growing year to year with no path set to reduce these numbers. It’s clear to see that the City of London and the students at Fanshawe have this homeless crisis at the forefront of their minds when it comes to what the city needs to be improving. With the municipal election upon us and the position of mayor in transition, hopes are high that something can be done to remedy this problem soon.
Homelessness London News

What is Fanshawe doing to reduce the use of single-use plastics?