The next Gretzky, again

Margaret Sheridan Leisure September 24, 2007
When I was 15-years old I was attending high school at home in Toronto between hanging out at the mall, spending my weekends learning to drink with friends, and periodically doing homework.

John Tavares is 15-years-old and he's already had an ‘Exceptional Player' rule adopted by the Canadian Hockey League to allow incredibly talented underage hockey players to be drafted into the league, and he's now trying his hand at changing the NHL's rules. 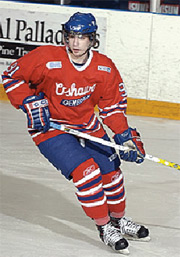 Prior to Tavares, the Ontario Hockey League required a player to be 16-years of age before becoming draft eligible, but he was so good that the Oshawa Generals couldn't wait, and the phenom was drafted at the ripe old age of 14.

Now that Tavares, the nephew of the National Lacrosse League legend of the same name, has made his mark in the OHL, which included smashing Wayne Gretzky's scoring record and winning the Red Tilson Trophy as the league's most outstanding player, he's anxious to see how he stacks up against the pro's.

The NHL's draft-age rule is that only players who turn 18-years of age by September 15 of the draft year are eligible. That means that Tavares misses his eligibility for the 2008 draft by five days, having been born September 20, 1990.

So the issue is: Should the NHL adopt a rule much like the OHL's, an exceptional player clause?

Tavares is saying yes, but a look at some of the good players in the past who have just accepted the rules as they stand, makes one wonder whether he wouldn't be better off getting that additional year to grow into himself before trying to commit to one of the most grueling schedules in major league sports.

Alexander Ovechkin missed eligibility for the 2003 draft by three days, but was taken first the following year. The Sedin twins missed out on the 1998 draft by nine days and ended up being taken second and third overall in 1999. Rick Dipietro was taken first overall in 2000 and Joni Pitkanen fourth in 2002 after both missed the previous years eligibility by four days.

It's hard to look at that list and think that those players may have lost out on much by taking that extra year. The chances of a rookie being prepared for the NHL at the age of 18 is slim enough that an extra year of playing in the OHL or moving into the AHL to build on size, strength and stamina is usually an NHL teams chosen route.

Every year come draft time, there's usually one player who's expected to stand head and shoulders above the rest in his year. They could be the Sidney Crosby's or Jay Bouwmeester's or even the Alexandre Daigle's. There's no denying that Tavares ranks up there as one of the most promising prospects in recent memory. But it comes to a point where you have to look at what's best for the player- and maybe that extra year of development will give Tavares the edge he needs to make the easiest and most productive transition into the NHL as possible.

New faces behind the bench