Ivana Pelisek News August 25, 2008
Imagine coming back to college as a mature student. Feeling a little uneasy because it has in fact been so long since you have attempted the crucial transition from the first time around? It is not impossible and it can be done with the right attitude and the right people backing you up.

Clayton King knows this all too well. Being a mature student at Fanshawe College himself, he has over come some obstacles to get as far as he is today; and he's proud of it.

Why wouldn't he be? He has made some incredible accomplishments along his journey here at Fanshawe.

King came to the college as a mature First Nations Aboriginal student in the fall of 2007.

Enrolled in the Fine Arts program here at Fanshawe, it is a program in which he absolutely loves to be a part of. 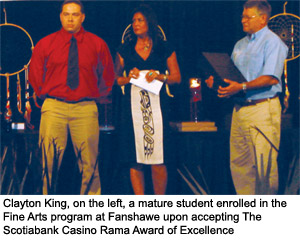 “Most days are 12-hour days for me here at the college. Whether it be in class or working at the First Nations Centre Office, I love to be a part of it all,” admitted King.

Growing up in St. Catherines, Ontario along side his family of six brothers and one older sister, life has taught him just how important it is to have great family and friends to help keep you grounded.

Not too long ago King was awarded two major scholarships, The Scotiabank Casino Rama Award of Excellence and the National Aboriginal Achievement award. Both awards are substantial and have taught King that anything is possible with the right attitude.

Vicky Proulx, who was a program Coordinator in 2007/2008, is one of the people who nominated King to receive the prestigious Casino Rama of Excellence Award.

Proulx submitted a letter of recommendation for King with high hopes he would be chosen as the rightful candidate.

The June 11 ceremony, which was held at Casino Rama, King received a Marble award with his name engraved.

King is one of 62 Aboriginal persons across Canada who has been given the honour of receiving the National Aboriginal Achievement Foundation Award.

King is a strong believer that his native tongue of Anishinabae should not be forgotten, and hopes to one day have Fanshawe include a language elective class available for students who are willing to learn or need to re-visit their roots.

“I feel like my native tongue is becoming extinct,” King explained. “I would love to keep it alive and have the aboriginal people be proud of their heritage and where they came from.”

The 15th annual Canadian Aboriginal Festival is to take place November 28 through the 30 at the Rogers Centre in Toronto.

The Pow Wow Open Drum Competition is where King is going to have his artwork showcased for the first time. He has also prepared sculptures and other fine aboriginal art to be displayed for the public to view and buy.

King has two more years at Fanshawe before receiving his diploma. After graduation he plans to attend University to receive a B.A. in Fine Arts.

“None of it would have been possible with out the tremendous support of my girlfriend, Kelly Hall, the wonderful faculty that the Fine Arts program has to offer and all the talented young artists that I have been surrounded by in the program. Thanks for all your criticism and fantastic effort. Great job folk's!” added King.