Once upon a time, saying you drove a hatchback was about as cool as wearing a sweater in the summer. However, since the mid-1980s, hatchbacks have grown in their popularity in Europe. And now, decades later, that trend is following suit in North America.

More and more car manufacturers, on our end of the globe, are offering these compact cars known for their cargo space. But, instead of them being economically priced, as one would imagine, the North American hatchback is being marketed as a “premium model.”

Take the Mitsubishi Lancer GTS, for example. While the Sportback version you see on this page is mechanically identical to its GTS sedan sibling, it costs $500 more. But, Mitsubishi isn't the only one charging extra coin for its hatchback versions; Mazda and Subaru are in the same boat. 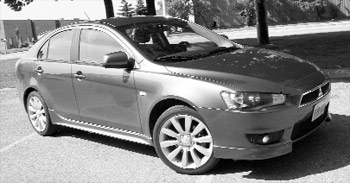 So the question is then: are they worth the extra dough? In the case of the Lancer GTS, from a styling point of view, I am not too sure. Though the Sportback version is not ugly, it is also not as pretty as the sedan. However, thanks to its extra roofline, there is much more space for you to haul your stuff. So, if you have baby strollers to lug around, this likely would come in handy.

Otherwise, the interior is exactly the same — but, this is not necessarily a bad thing. I like the clean and clear layout of all of the controls, and the seats are both firm and supportive. While Mitsubishi should have invested more in sound-deadening materials (the Lancer's interior isn't the quietest in the world), overall, it's not too bad, since there is plenty of head- and leg-room for both the front and back occupants. Unlike the Lancer Ralliart and Evolution models however, the GTS is only available in front-wheel drive with a normally-aspirated engine.

Averaging 9.7 litres/100 kms, the Mitsubishi's motor is a 2.4-litre inline four-cylinder with variable valve timing; a feature that assists with fuel-economy. Able to reach a max output of 168 hp (167 lb/ft of torque), the Lancer's five-speed manual gearbox is sufficient for making progress in traffic. However be warned, this engine makes a lot of noise, when provoked (and I'm not talking the nice kind of noises either).

The less talented (or lazier) can opt for the CVT automatic gearbox if they choose, but seeing as I typically hate automatics, I'd steer clear of this option, unless you fall into one of the two aforementioned categories.

What about the Lancer's ride and handling, you ask? Think of it as a mini Cadillac, and you'll get the idea.

While prices for the Lancer start at a mere $23,498, if you can stretch your budget to get a Ralliart or Evo version instead, I really believe you'd be doing yourself a huge favour.