As the new reporter for the New Music Friday Night shows at the Out Back Shack, I am very excited to be reviewing the wide range of talent offered up for free at these shows, along with some candid conversations with the bands when possible.

I'm in my first year of the Music Industry Arts Program so it is a dream come true to be able to work doing two of the things I love to do, which is music and writing! (If you have any comments, suggestions or questions that you would like asked, email me and I'll do my best to accommodate!)

This past Friday three amazing punk/rock bands took to the stage for an awesome show. I wasn't sure how many people would be there as it was the start of the Thanksgiving weekend, however, the turnout was better than I thought it would be. For those of you who were there you already know that the show was energy charged. For those who weren't you missed one great show!

Lucky 6's were up first and opened with Hell Song. They have a pretty heavy hard rock/metal sound that's still rooted in punk. The five-piece band (Brian Purtill, vocals, Alex Howard, guitars, Brad Jerk, guitars, Jeff “El Heffe” Depew, Drums, Oscar Porchee, bass) stayed consistent throughout their set. I spoke with two members of the band backstage; Porchee and Purtill. Collectively the members of the band have known each other for around 20 years, been in other bands and jamming together since 1998. They told me that the Out Back Shack has a “nice setup with a full P.A. system,” something that they don't get too often. I asked them what their biggest influences were and they said “rock n roll and a dash of punk.”

I asked them what would they want our readers to know about their band and they had this gem: “Our collective weight is 825lbs… we want people to come out and enjoy the rock… Jeff the drummer is our version of John Cassidy, the girls just love him… and Oscar plays eight days a week.”

Next up on stage was Boss Rebel. I interviewed them all as a collective (Eric Intzandt, guitar, he dared me to try to pronounce it and I didn't do too badly - hint - the ‘d' is almost silent, Jay Dunbar, drums, Troy Mann, bass, and Mike Scott, singer); they are self-described rock/reggae/ska and everything about them makes you get that vibe. They opened up the night with She ain't Japanese which was very reminiscent of Sublime, very happy and bouncy. Interviewing them together made me understand they are very much individuals in a group. They are very relaxed and genuine as well as a bunch of boys who want to have fun and love what they do. When I asked them what they wanted people to know about them they told me a few very funny stories that wouldn't be appropriate for this paper. What I can say is that they want people to come out and enjoy the music and party! 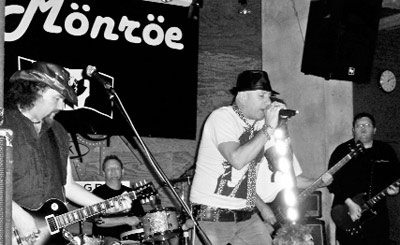 Headlining the show were the legendary '63 Monroe (Scott Bentley aka Steven R. Stunning, vocals, Pete DeKoker, bass and vox, Lavard, drums and attitude, Brian McMillian, The Whip Fetish-guitar, and Tim ‘Drinks' Thompson, killer guitar and vox). I spoke with two members of this ensemble and I found out a lot of information! The best thing about seeing this punk/rock n' roll band was noticing how people reacted to this band that have been together for about 30 years, though not the entire original line-up. In fact Stunning is the only original band member. Those in the crowd were impressed, saying things like “These guys can really rock for old dudes” or “He's too old to sing like that, he's gonna break a hip!,” and “WOW!”

I spoke with Stunning and out of the massive amounts of information he gave me I picked out a few points. He is the only original band member and he started out in 1978 or 1979. In 2003 they were inducted into the London Rock n' Roll Hall of Fame and they started to get together and play again after an extended break. They started out as a punk band that morphed into almost heavy metal but now for the most part just play good ol' rawk ‘n' roll! Then I spoke with Thompson. Thompson was in a similar program to MIA at Fanshawe back in the day. He was in the Ontario Institute of Audio Recording Technology in 1983. He loves to “work on both sides of the glass,” as he put it. He loves the back and forth energy from the stage to the audience and feeding off that energy to make the show exciting! '63 Monroe also had an MIA student Gabe Cugelman record five demos for them as Cugelman's final project last year and are planning to use them along with eight new tracks for a new CD.

One thing that each band stressed was that they just want fans to come out and enjoy their shows. All three bands draw inspiration from each other and feel a close-knit network of musicians and friends. After spending a few hours getting to know them I already feel like I have known them all for years. They all have Myspace, and Facebook pages and I think that anyone who is into rawk ‘n' roll or punk or ska type music should look them up and take a listen to their streaming audio! Until next week keep on RAWKIN!