Cirque du Soleil's about to make Londoners' jaws drop as they bring their acrobatic and awe-inspiring production of Alegria to the city this November.

Meaning “joy” and “jubilation” in Spanish, Alegria is a show with a universal message that'll make audiences smile.

“It's about a celebration of life, a feel-good kind of show,” said Sheryl Lynn Valensky, the show's assistant art director.

The show was conceived in 1994, when the Internet was exploding and globalization became prevalent. All these changes and innovations are represented within the show and its characters. There are the old birds that represent the old way of aristocracy and hierarchies. Then there are the nymphs and the Bronx symbolizing youth and change. 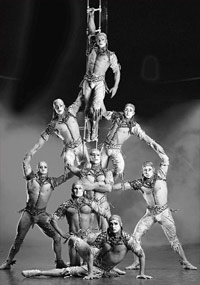 The show takes the audience through the struggle between the old and new way, all the while captivating audience members with breathtakingly intricate costumes and feats of daring in true Cirque du Soleil fashion.

It's been on tour for 14 years but the production still remains relevant, said Valensky.

“Everyone gets something different out of it,” she said. Even today's environment is reflective of the show's message.

“We're hitting a new cycle of change,” she said. “People are needing to come up with more strategies. People look at it (the show) with fresh eyes.”

Besides its message, Alegria's stunning visuals are almost entertainment enough. Lush, autumnal lighting, impressionistic painting and the performers — that look like pieces of art themselves — all add to the experience. The music is the “best” out of the Cirque shows — it's the most popular soundtrack, said Valensky. It's got everything from jazz, pop, ballads, accordion and synthesizer. All these elements provide a backdrop for the death-defying acts that make up the show.

Aerial high bars, contortionists, hand-balancing, fire knives, trapeze and more showcase incredible talent who never fail to elicit gasps from the audience as they flip, twirl and fly over their heads.

Alegria's world-class performers make the show more than just any other circus.

“We're basing it on what the human body can do,” explained Valensky. “We're taking it back to the basics in a good way.”

The all-ages show gives will be at the John Labatt Centre November 12 to 15. Tickets are on-sale at http://www.johnlabattcentre.com.