Canadian hero always wanted to be a student first


While Jesse Davidson went on to be a nationally-known name and a champion for those also suffering from Duchenne muscular dystrophy, he just wanted to be treated like a student. 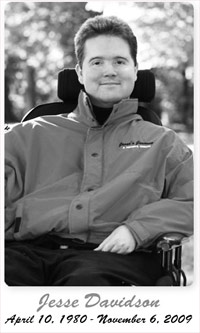 “He was well known for the work he and his dad did — although he didn't want the attention, he wanted to be treated the same as everyone else,” said Emily Marcoccia, director of marketing and communications at Fanshawe College.

Even with school fundraisers or ceremonies, Davidson was not used as a spokesperson. He chose not to be in the spotlight, he wanted to be seen “as a student first” and “not a student with disabilities,” said Marcoccia.

“He wasn't looking for recognition,” she said.

In 1995, Davidson with his father John pushing his wheelchair, completed “Jesse's Journey.” They trekked 3,300 km across Ontario and raised a million dollars for research for Duchenne muscular dystrophy.

Three years later, John set out on his own “Jesse's Journey, a Father's Tribute,” walking over 8,000 km across Canada. He raised an additional two million dollars.

Davidson graduated from Fanshawe in 2002 with a co-op endorsed diploma in hotel management. In 2006, he was honoured as one of six Distinguished Alumni.

Throughout those years, he touched many. Davidson passed away on November 6, 2009 at 29 years old and “Jesse's Journey” received a huge influx of calls from people in the public who had met Davidson and his father, and from those who went to school with him. Still, although he accomplished much in his life, it is still a difficult loss.

“We knew this day was coming but it's still sad that it's here,” said Sue McKittrick, a spokesperson for Jesse's Journey. Yet despite the loss, they are filled with pride for the work he did and are inspired to carry on his misson, she added.

“Our goal is to cure Duchenne muscular dystrophy. We continue on course and that's what Jesse would've wanted as well,” she said.

But it wasn't just Davidson's fundraising and awareness efforts that made him a national icon — it was his relationships with everyone, even as a student.

“He was just a lovely young man. Every day we got that great smile,” said Marccocia. “Someone like Jesse doesn't just touch your heart for a moment, but for a lifetime.”