Editorial opinions or comments expressed in this online edition of Interrobang newspaper reflect the views of the writer and are not those of the Interrobang or the Fanshawe Student Union. The Interrobang is published weekly by the Fanshawe Student Union at 1001 Fanshawe College Blvd., P.O. Box 7005, London, Ontario, N5Y 5R6 and distributed through the Fanshawe College community. Letters to the editor are welcome. All letters are subject to editing and should be emailed. All letters must be accompanied by contact information. Letters can also be submitted online by clicking here.
Last week while waiting outside one of my classrooms, my classmates and I heard an agitating noise, similar to that of a car door being left open. People around me began checking their cell phones and asking others what “that” noise was, while carrying on with their daily chatter. It was not until that annoying yet subtle noise transformed into an angry beeping alarm, that the people around me began to take notice of the white flashing light (which could not be seen well due to the lights in the hallways). The next thing you kind of heard was a crackly voice saying something about a lit cigarette in a garbage bin and to vacate the building until further notice was given.

Once I was outside, I began talking to people about what had just happened. I began asking people's opinions about this “fire drill” and how effective they thought it was. Many people I spoke with were confused and did not know what was going on except they had seen large volumes of people exiting the school and felt it was in their best interest to follow.

I asked people how effective they felt the fire drill was. A large percentage of people felt that the drill was extremely unorganized. One girl said, “Man, I was in F-block and the only reason I came outside is cause my friend texted me and said there was a fire in the building. I felt bad cause there were people around me, working on stuff or just chilling out like normal. I started to tell people get out there's some kind of fire and they looked at me like an alien. Some girl even said whatever and got on the elevator!” 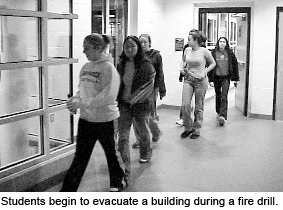 A male told me, “Man, we were in the middle of class an the only reason I'm outside is cause I noticed more traffic in the hallways than normal, I said something to my teacher and we all bailed.”

I could go on and on sighting similar quotes and that alarms me. Now I understand why not many people knew there was going to be a fire drill, they are supposed to be spontaneous and simulate an emergency. Similar to most people, I feel very fortunate that this incident was only a fire drill as know one wants to fall victim to an actual fire. I am very grateful this was only a simulated incident for the simple fact that had it been real the number of casualties experienced at Fanshawe could have been countless.

I say this not to discredit Fanshawe's hard working staff, but I do wish to express my concerns as follows: My first concern is that such a large portion of our population either were not alarmed and failed to leave the building. I understand that it is inconvenient and you're busy and it's cold outside; however by one individual not exiting as instructed it shows another individual that it is unnecessary for them to leave as well and that subliminal chain continues to grow until an entire group is now at risk. People need to be more aware of how their choices influence others. Also it is important to keep in mind some inconvenience is not worth the rest of your life.

My second concern centres on the alarm itself. The person talking on the speakers and the blinking white lights were confusing and ineffective. Now I will not sit here and claim that these systems are useless because they were not, people did get outside just not enough of them. I found from talking with others and my own personal experience, that until the beeping noise became aggressive many people were unsure of what it was. I found that it was extremely difficult to hear the voice radiating from the speakers due to the sound being muffled and crackly.

My third concern is in reference to the white blinking lights that due to the well-lit hallways were difficult to see. I realize these lights are in the school to assist and alert those who are deaf. However, did anyone stop to think about those who suffer from various seizure disorders such as epilepsy? For those of you who are not aware, blinking strobe like lights can cause some who suffer from these disorders to experience a seizure.

As a final thought, I will say I am glad we had this fire drill. I believe it has done its job by giving people a chance to practice exiting the building in mass and identifying any weaknesses that could compromise the safety of us here at Fanshawe.