OPSEU votes to strike, heads back to bargaining table

Ivana Pelisek News January 18, 2010
Armed with a mandate to strike the Ontario Public Service Employees Union is hoping to jump start negotiations that had stalled in late 2009.

The strike vote held on January 13 involving Ontario's 24 colleges show that approximately 57 per cent of faculty province-wide voted in favour of a strike. Although the number is quite low for a strike, this result does give OPSEU a strike mandate and some bargaining power. 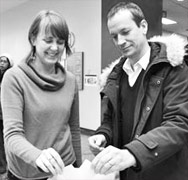 The College Compensation and Appointments Council representing the Colleges continues to urge OPSEU to head back to the bargaining table to work out a suitable agreement for all parties involved.

“We are to return to the bargaining table next week...and we will make every effort to reach a settlement...a practical settlement,” said David Scott, a spokesperson for College Compensation and Appointments Council.

Ontario colleges in November 2009 imposed a new contract to college faculties that would see salary increase by eight per cent over a span of four years, which would raise the maximum salary to $103,975.

While a majority of Ontario faculty voted in favour of strike, staff at Fanshawe did not. According to unofficial results the faculty strike vote at Fanshawe College were 59 per cent against a strike, and 41 per cent in favour.

Paddy Musson, chair of the college academic division of OPSEU, believes the main reason why Fanshawe faculty voted against a strike was because of the recent London bus strike, which left many students stranded and unable to attend classes.

“I would like to thank the faculty at Fanshawe College for putting students first throughout this bargaining process and strongly taking into consideration the hardships Fanshawe students have already faced with last semester's LTC strike,” said Jabari Cooper, FSU president.

According to Dr. Rachael Donovan, the chair of the colleges' bargaining team, the main priority has to be on reaching an agreement and averting a strike.

Musson believes “the best thing to have happen at this time is to reach a settlement” to avoid potentially damaging students' academic learning while at the college.

While some students feel that their academic year could be in jeopardy if a strike does happen, that would be a first in Ontario.

“Never in the history of college faculty strikes has any student been unable to finish their semester,” stated Cooper.

The man who wrote the book on living and working oversees