Take the power back: Protesting the torch

Darius Mirshahi Opinion January 25, 2010
The Olympic Resistance Network in Ontario is claiming several victories in the wake of disruptions to the Olympic torch relay throughout Ontario. In Ontario there were more disruptions, protests, and actions against the Olympic torch than in most other provinces combined.

Ranging from peaceful protests, to banner drops, blockades, and disruptions, and even physical confrontations, Ontario anti-Olympics activists took to the streets and forced several cancellations, delays, and rerouting of the torch relay, often getting national media coverage.

Two indigenous reservations blocked the torch out of their territories altogether. In Six Nations, indigenous youth activists declared they would not allow the torch to enter into the heart of their territory and that they would physically block it. The torch relay went to a bingo hall instead where the runners ran circles around the parking lot. In Oneida, just west of London, the torch was physically blocked as well and that whole portion of the relay was cancelled completely. 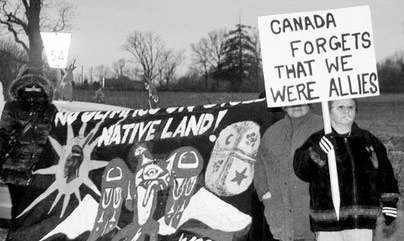 Indigenous solidarity activists joined indigenous peoples in urban centres to disrupt and protest several torch events as well. In Toronto, a large chunk of the relay was cancelled as more than 250 people swarmed the downtown core and blocked off three separate intersections on Yonge St., blocking the torch for over an hour and a half before they split the torch in two to go around the protest. The celebration at city hall was also disrupted with banner drops and loud chanting.

In Guelph the torch relay and the protesters collided, leading the torch runner and a police officer to fall to the ground. Pictures circulated throughout the media of the torchbearer flame in hand sprawled out on the snowy pavement. In Kingston an anti-Olympics banner was dropped from the main stage of the torch celebration, while in Kitchener 250 people took to the streets to protest the torch and dropped several banners in front of RBC, a primary Olympic sponsor, before disrupting the celebration itself.

In London, more than 40 people gathered at the main entrance to Victoria Park to hand out anti-Olympics literature and free food before marching into the crowd chanting. Some of the torch relay volunteers “switched sides” and started handing out anti-Olympics material.

There were also protests in Ottawa, Barrie, Stratford, Hamilton, and other communities across Ontario, and in Northern Ontario eight indigenous and solidarity activists were arrested after setting up a blockade on the Trans-Canada highway.

The torch has left Ontario, but several Ontarians have decided to make their way out west to protest the Olympics themselves. Many Olympic resisters have also vowed to protest and disrupt the G20 meetings in Toronto June 26. This left one Toronto police officer so nervous that they were quoted saying, “The G20 is gonna be here in six months and we can't even handle this,” after the Toronto torch disruption.
Editorial opinions or comments expressed in this online edition of Interrobang newspaper reflect the views of the writer and are not those of the Interrobang or the Fanshawe Student Union. The Interrobang is published weekly by the Fanshawe Student Union at 1001 Fanshawe College Blvd., P.O. Box 7005, London, Ontario, N5Y 5R6 and distributed through the Fanshawe College community. Letters to the editor are welcome. All letters are subject to editing and should be emailed. All letters must be accompanied by contact information. Letters can also be submitted online by clicking here.

Call me old-fashioned but...Choose your words wisely they may just be your last