Nice, quiet girls beware; when Tony Lee is in town, there's no telling what you'll do.

This is usually the case when Tony Lee, the XXX-rated Hypnotist comes to Fanshawe. He has performed to a sold out show in Forwell Hall for the past 10 years, and last week's show was no different. 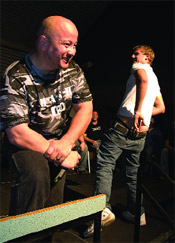 “I heard about Tony, but it was sold out last year,” said Tina Fretter, a first-year fashion student. “I'm so glad I got tickets early [this year]; this was a blast!”

Tony's powers are an unstoppable force — it's the only way to explain how he can convince a guy to kiss another guy's bare ass. Or make another girl feel like she's on mushrooms and being chased by the cops.

“This Tony Lee guy is sinister, he takes control of your mind and takes you on a ride to hell, he makes you do some sick disgusting bestiality scene in front of a thousand people and you love every minute of it,” posted one audience member after being subjected to one of Tony's shows.

The crowd that attended the x-rated show in Forwell Hall last Wednesday felt the same way.

“He made me want to suck dick. Who does that?” wondered Matthew Curbridge, a second-year Auto student who was hypnotized on stage.

Many scientific institutions maintain the assertion that when someone is under hypnosis they still have at least some degree of control over the situation. Claims that when someone is hypnotized, they are actually no more in the hypnotist's control than anyone else in the audience.

But tell that to they guy that ate whipped cream off another guy's crotch.

If you missed him this year, make sure to get tickets early next year, because it will surely be a sold out show.