Well, here it is, the new 2006 Mazda MX5. Formally known as the Miata, this new roadster is set to take on the mantle of the previous two generations, and improve on it.

So, have they cracked it? Is it any good?

Well, I won't beat about the bush here; this car is simply fantastic. I have never come across a car that does everything as well as this one does. To say Mazda got it right is definitely an understatement. 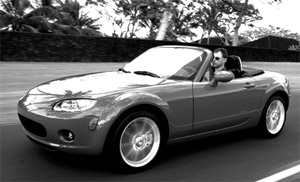 Now I bet you want to know why I think it's this good. Well, let me tell you in detail, starting from the outside.

The Miata has always been a pretty car to look at, but no model before it has been as good looking as this one. It has just the right curves, the right wheel arches, even the right rims. It's just one of those cars that looks so good you can't help but smile every time you walk up to it.

Your smile stays as you open the door and get in. The old Miata had a cramped, boring interior. This new one has space for people of all sizes, plus places to put all sorts of stuff in compartments between the seats, behind the seats, and not just cup holders, but also bottle holders in the doors.

The interior is trimmed in quality materials, it finally has a tilt steering wheel, and the top can be raised and lowered without you having to leave your seat.

If that is not enough to raise your eyebrows, the smart key surely will. If you get the GT trim package, you get leather seats, xenon headlights, and this smart key, which you just keep in your pocket. When you walk up to the car and press a black button by the door handle, it unlocks. Then just get in and twist a knob to start the engine, all without you having to place the key anywhere in particular. This type of technology has previously been reserved for high-end luxury sedans and sports cars like the Cadillac XLR, but to find that feature in a car in this category, it must be an industry first; it sure is as far as cars on sale in Canada is concerned.

So, nothing to complain about so far, but how does it drive?

Well, this is the last department anyone has to worry about. The old Miata was a fun car to drive, and that's what made it such a huge success. The new one is several times better. First of all, the engine is much improved. It now has a 2.0-litre, inline four that produces 170hp. The engine is not only smooth, but also has a sweet sound as you rev it. No matter what the speed or the gear it accelerates away smoothly. Speaking of gears, you get six of them to play with, and that number stays the same no matter what transmission you choose. So, not only you get a six-speed manual, but you can also opt for a six-speed automatic. The automatic is just such a delightful surprise. Mazda has given it pedals on the steering wheel for gear selection, so you can drive around playing with gears as if you were driving a Formula-One car. Usually, such systems suffer from a total lack of responsiveness when you select gears, but this one reacts instantly, and even times the downshifts properly. In short, its similar to the system found in the Aston Martin DB9 I reviewed a few weeks ago, and yet, you can buy seven of these new MX5s for the price of one DB9.

The true driving enthusiasts will still prefer a proper manual, and the six-speed manual box doesn't disappoint. First of all, the gears are well spaced, and the box is slick to use. It certainly is one of the best manual units I have ever come across, and easily beats the one in the Honda S2000. The clutch feel is great too, but does require a little getting used to since the grab point is within an inch off the floor.

Getting used to it takes no time at all, and you'll soon be flying around in this car. The speed can also be carried through the corners. The old Miata made its name for its brilliant handling, however that came at the expense of a harsh ride. The new MX5 retains its handling traits, yet offers a comfortable ride. Perhaps it isn't as razor sharp as the 2005 Mazdaspeed Miata, but that had stiffer dampers and heavier cross braces. The problem with the Mazdaspeed Miata was that when it let go of its tail, it didn't give you much warning about it. The new MX5 gives you enough notice as to what the car is about to do. In return, this is one of the easiest cars to drift, and I sure enjoyed that aspect of it. Sorry Mazda, I might have used more tire thread than I should have, but trust me, I'll make it up to you.

So, any faults? Hmmm. Let me think…well...it could use... Nope, can't think of anything. After all, it even has a huge trunk that swallowed all my junk, and due to its clever four-cylinder engine, it even gives great fuel economy.

So, if you like your cars to have flaws, don't look at this MX5 because it doesn't have any.

Heck, it's even priced well. A base GS model is about $28,000, while a loaded GT model is about $35,000. That really is phenomenal value for the money. If you are looking for your next sports car, trust me, you can't do any better.

Would I buy one? Absolutely. In fact, I am about to do just that.