Sleep is as important as studying 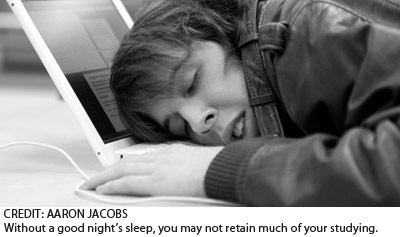 
Editorial opinions or comments expressed in this online edition of Interrobang newspaper reflect the views of the writer and are not those of the Interrobang or the Fanshawe Student Union. The Interrobang is published weekly by the Fanshawe Student Union at 1001 Fanshawe College Blvd., P.O. Box 7005, London, Ontario, N5Y 5R6 and distributed through the Fanshawe College community. Letters to the editor are welcome. All letters are subject to editing and should be emailed. All letters must be accompanied by contact information. Letters can also be submitted online by clicking here.
WATERLOO, Ont. (CUP) — "I just pulled an all-nighter and I am not sure all that cramming worked. I just finished the exam and what I thought I had retained simply disappeared," I overheard as I followed two students down the hall.

I was tempted to intervene and provide them with some unsolicited advice, but I resisted as they carried on down the hall. I was going to remind them of some new evidence that links a good night's sleep with memory retention, all of which seriously questions that old and outdated wisdom that suggests studying all night will enhance that next morning's exam performance.

Recent research suggests that when people learn new skills or information, their retrieval performance does not improve until after they have had more than six — and preferably eight — hours of sleep. What students have studied or tried to learn does not get properly encoded in their brain's memory circuits.

This research has identified a critical association between memory banks, retrieval and the first and last stages of a night's sleep. This data has some very important implications for institutions such as universities, academies, medical schools and the military — institutions that attempt to train or educate people after long periods of sleep deprivation.

I have tried to learn new skills under the stress of sleep deprivation before, as a "draftee" during my basic training with the 101st Airborne Division in the U.S. Army. It was futile trying to learn to strip a .30 calibre, water-cooled machine gun while suffering from severe sleep debt after being roused out of bed at 5:00 a.m. I am sure our field first sergeant never once thought that our performance on the firing range might be affected by lack of sleep.

How many current students will try for greater sleep in the midst of October's midterms or the coming final exams in December? Only a very small, but wise, minority will do so.

In experiments in sleep laboratories, individuals who slept for eight solid hours get healthy bouts of two kinds of sleep. The first two hours are spent in deep, slow-wave sleep while the last two hours were spent in REM (rapid eye movement) sleep. Those who received both types of sleep tended to have much better retrieval for materials they had learned the day before.

Even those students tested two to three days to a week after their training could do the visual tasks given to them faster and more accurately.

Recent neuroscience research has provided an explanation for such phenomena. During the first two hours of sleep certain brain chemicals are in steep decline as information flows out the hippocampus and into the cerebral cortex.

During the next four hours, the brain engages itself in an active neurochemical conversation during which the information is distributed, categorized and networked.

During the last two hours of sleep, brain chemistry and activity again change drastically as the cortex goes into an active dreaming state. The memory region is now shut off from the cortex as the brain literally reenacts the learning and solidifies the new connections in its memory banks or what is referred to as "consolidation."

Making such healthy sleep even more difficult, university students tend to suffer from a form of "sleep bulimia." This involves purging, wherein they try to get by on three to five hours of sleep per day and binge by sleeping around the clock on weekends.

Most of the information learned during a sleep-deprived period, however, will likely be lost; the forgetting curve is remarkably steep.

So experts have concluded that how well students do on an examination depends on how well they slept the night before.