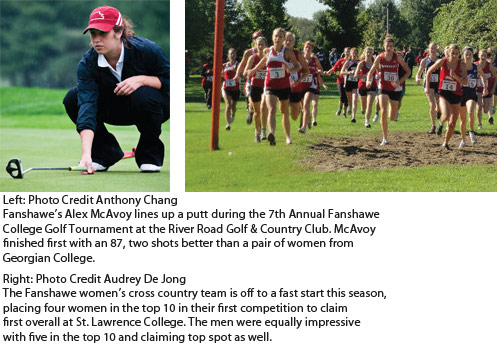 
This past weekend marked the season openers in competition for both the men's and women's varsity cross country and golf teams. The Fanshawe Falcons varsity cross-country teams traveled to Cornwall, Ontario on September 18, and started right where they left off from last season by winning both the men's and women's overall titles to start the season.

On the women's side, it was Liliane Sparkes and Erika Houde- Pearce supplying the one-two punch for the Falcons by taking the top two positions with times of 20:38 and 20:47 respectively in the women's 5km event. Melissa Linker and Tineke deJong rounded out the top 10 for the Falcons, finishing with respective times of 22:19 and 23:15.

For the Fanshawe men, it was Clint Smith taking the overall men's title with an impressive time of 28:51 in the men's 8km. Also on the men's side, it was Fanshawe's Sean Coleshill, Daniel Bright and Biemnet Yemane, all finishing within 10 seconds of each other to take the 6th, 7th and 8th spots with times inside of 31 minutes. Rounding out the top 10 in the men's field was Fanshawe's Josh Lumani with a time of 31:15.

In Fanshawe varsity golf action, it was a successful start for both the men's and women's teams, with both teams finishing in the top three in the overall team standings to begin the season.

For the men, it was Fanshawe's Mike Waite shooting an impressive 70 to take the men's individual title to begin. Also for Fanshawe, last season's Ontario Colleges Athletic Association silver medalist Taylor Booth got off to another strong start by shooting 71 to finish one shot off the lead.

For the Fanshawe women, it was Alex McAvoy shooting a score of 87 to capture first overall in the women's individual category. The Fanshawe golf teams will look to continue their early season success this week with tournaments in Lindsay and Oshawa, before rounding out their regular season next week in Niagara, Ontario.