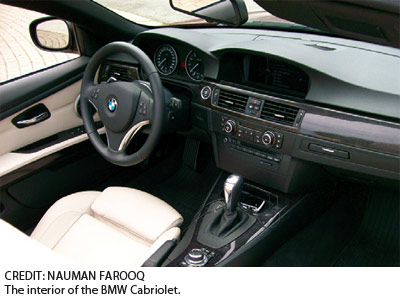 
Earlier this year, I tested the Lexus IS350C hardtop convertible and found it to be better than I was expecting. Surprised? I sure was. After all, most Toyota/Lexus products are about as entertaining as an algebra class.

The IS350C turned out to be so good that I started imagining that if I had the money to buy a car like that, I might just consider it.

I wondered what else in this class might be of interest to me. There is the Audi A5 Cabriolet and the new Mercedes-Benz Eclass Cabriolet, both of which are very nice, but these two offer soft-tops rather than a folding metal roof. That would be fine if I lived in Miami or Dubai, but not in Canada, where it tends to snow a lot.

The only car that can hold its own against the impressive new Lexus is the BMW 3-series Cabriolet, which has gone through some cosmetic changes for 2011. You can spot the subtle changes if you look hard. There are new headlights and tail lights, plus some new bumpers. I won't say the look has improved, but since it doesn't look worse than before, I'd say job one done well.

The changes to the interior are very subtle as well. It has the new i-Drive system, which is nice because it makes understanding this gadget a lot easier. Apart from that, the only change I noticed was the placement of the seatbelts, which used to be in the car's body, but are now attached to the seats. I like the newer seatbelts because they fit you more snugly.

The changes are not just cosmetic, because you do also get a new engine. It is the same size as the old motor (three litres) and has the same amount of power (300 hp, 300 lb/ft of torque), but rather than having two turbos, the 335i now has a single turbo. But its not any regular turbo, it is a twin-scroll turbo, and this is the first ever production application of such a turbo with a straight six-cylinder engine.

So why go through the trouble of developing a new engine when it doesn't give you any more power? The answer is fuel economy. The old 335i used to average about 13.5-litres/100 km, the new one managed 11.6- litres/100 km. It might look like a small improvement, but over the length of your ownership, it might save you a small fortune.

The Cabriolet model still is only available in rear-wheel drive format, which is what an enthusiast wants. Power is fed to its wheels via either a six-speed manual gearbox or a six-speed automatic with beautifully manufactured pedal shifters. For 2011 there is a new model also available called the 335is. This version gets 20 hp more than the regular 335i and is also available with a seven-speed dual-clutch gearbox.

My test car, however, was the regular 335i Cabriolet with the automatic transmission. This is one of the best automatic gearboxes on offer and its shift times are very quick for an auto. So if you want to have some fun, this car delivers.

If you like lightning fast getaways, you'd be happy to know that the 335i can sprint from 0 to 100 km/h in 5.7 seconds, which is quick enough to dispose of most cars on the road. Plus, it just sounds so awesome when you punch it towards redline through a tunnel.

Performance and gadgets are one thing, but the most important thing about a convertible is how it copes on the roads when you drop the top.

The simple answer: very well. First, this folding hardtop takes just over 20 seconds to either put up or down, which is c o n v e n i e n t . Then there is the chassis s t i f f n e s s , which is probably one of the best in the industry. The most impressive thing is its aerodynamics. The IS350C is not much fun on the highway with the roof down — it's best to use that in the city only. The 335i Cabriolet was comfortable with the roof down even at high speeds. If you're looking for a convertible that is comfortable on the highway with the roof down, this 335i is very good indeed.

But what if you encounter some twisty roads, how does it handle? One of the most impressive features of the IS350C was its handling. Sorry to say, the Lexus loses out here also. The IS350C is a fine handling machine, but it lacks the steering feel and the chassis set-up of the BMW. You know what the 335i is? It's just better, in just about every single way: it looks better, has much more room in the trunk, more room for backseat passengers, has a better ride, better handling and much more.

Any complaints? Well the only one I can think of is that it is a victim of its own success. This is a popular car in this segment and thus you see plenty of these out on the roads, so it's not what you'd call a rare sight. The IS350C is just that, and there is a certain amount of pleasure one can get out of driving something not many people have.