Motoring: Evora is one beauty 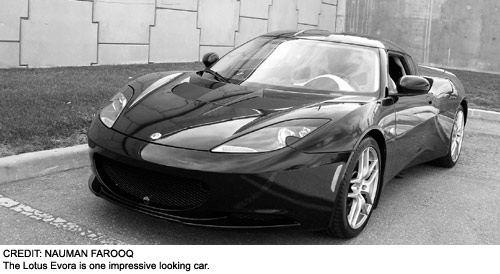 
One of the most respected and admired names in the world of sports cars is Lotus. The company has been around since the 1950s, building race and street cars, and every model they have made has had enthusiasts following.

I myself am a huge Lotus fan, falling in love with the brand ever since I saw James Bond drive around in a white Esprit in The Spy Who Loved Me.

Being able to drive some Lotus models in the past few years has only increased my love for them. Not only are these cars beautiful, their performance leaves you speechless at times. They are proper sports cars for proper car enthusiasts.

So what about their new model, the Evora. Is this a genuine Lotus, or has the company changed its ways?

To find out, I borrowed an Evora from the only Lotus dealer in Ontario, Gentry Lane in Toronto.

The very moment I laid eyes on my test car, I was in love. This low, sleek, mid-engine coupe is easily one of the most beautiful cars on sale in Canada today. From every angle, the car looks stunning. All of its proportions look right, and in black, my tester looked even more menacing. This car had as many — if not more — looks than the Audi R8. So if you're buying an exotic just for looks, this Evora might be a very cost-effective way (it costs $50,000 less than an R8) to garner some attention.

Open the door, and you will be greeted by an interior that is not only beautiful, but is the nicestsmelling one I have come across in a very long time. The leather in the Evora has a very high-end leather aroma to it, something you don't get from most modern cars.

Sit inside and you will find some very modern, attractive gauges, which is actually very un-Lotuslike. You will also find supportive and comfortable seats in the front, but while this might be the only mid-engined 2+2 currently in production, the rear seats are best used for stowing groceries, not humans.

Once settled in, you will notice the rear window is much smaller than expected, so be sure to adjust the door mirrors properly.

The motor came to life in a very discreet manner — not what you'd want from an exotic sports car. There are two reasons for that. First, the 3.5-litre V6 engine comes from one of the most boring cars on the planet, the Toyota Camry. Lotus engineers have coaxed more power out of this unit, which can now produce 276 hp, but that is a mild gain over the Camry's 268 hp.

The second reason the Evora tester sounded quiet was because it had the standard exhaust, rather than the optional sports exhaust, which would make it more vocal.

On the road, the first thing I noticed was its ride comfort. Most cars in this category have very hard, stiff rides because the suspension is calibrated for optimal handling. The folks at Lotus seemed to have found a magic setting, because the car not only rides like a luxury car, but when you get a chance to test its handling, you'll be amazed how light and agile this car is.

Lotus has built their reputation on making lightweight cars that handle very well. The founder of the company, Colin Chapman, believed that rather than building a heavy car and adding a big powerful motor to propel it, it would be better to build a light car. Lightness improves the handling, is less taxing to its brakes, and doesn't require a big motor to go fast. At 1,380 kg, the Evora is a lot lighter than most of its rivals.

I was, however, expecting the Evora to be quicker. It's not a slow car by any means, but for me, it didn't have that kick. It might only take 5.3 seconds to sprint from zero to 100 km/h, and can top out at 280 km/h, but it just doesn't feel rapid enough. A BMW M3, which costs approximately the same amount, would annihilate the Evora in a drag race.

Nor was I convinced with its stability at higher speeds, the front just felt lighter than I was hoping. So either it lacks sufficient downforce at the front, or it could make do with a heavier steering feel to boost confidence.

It could also make do with a smoother gearbox. The one it has lacks the refinement of the units found in cars like the BMW M3, Porsche Cayman and the Audi S5.

While the Evora is a very nice car, some of its rivals are better sports cars. So why buy an Evora?

Well, the biggest reason is exclusivity. Gentry Lane will only get about 12 to 15 Evoras to sell each year, so you won't be tripping over these at every traffic light. Another reason is it is a beautiful car to behold.

While it may not be the best driving tool in its price range, the Evora is easily the most unique car in its segment. Prices start at $85,000.