Audi A6 the thinking man's Mercedez


There are a few car brands that are near and dear to my heart. Audi, is one of them.

Let me tell you why.

When I was 14 and living in Saudi Arabia, I got a ride to school one morning in an Audi 5000CS. It was owned by an acquaintance, and he showed up late to take us to school.

So, on the route, which consisted of mostly highway driving, and let me tell you, highways in Saudi Arabia are paved as smooth as a billiard table, and are wider than the runway at Pearson Airport. We hit 210 km/h. That was the first time I had ever been in a car at over 200 km/h. The fastest I had been before that was probably 150 km/h, so this was quite a jump. The end result? We made it to school five minutes ahead of schedule.

However, there is one problem with car companies I put in that list, and that problem is, I am usually harsher and more critical of them then cars that are not on my list. Reason being, because of love, you expect more, you want more out of them. It's like your own child, you want them to succeed, and their failure hurts you more then it hurts to find out your friends child has failed at something. 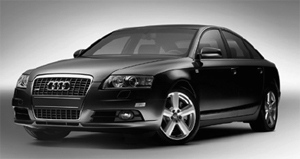 So, when I went to pick up the Audi A6, the first Audi I had driven in years, I was in limbo. I didn't know what to expect, and I was nervous thinking, “What if I don't like it?”

So, as I pick up the key, I get in the car, jump in, start it up (fires up beautifully with that soft starter where you twist the key for a millisecond and it finishes the job for you), and sit there for about 10 minutes, without moving an inch. I didn't know much about its Multi Media Interface, which controls the navigation, stereo, hands free phone and vehicle dynamics. Teaching myself how to use it and what does what for it was like sitting in front of a computer for the first time. You read about it, you have an idea what it can do, but never actually used it. Once I got the hang of it, I tell you, you can never go back to an ordinary car again. This technology looks sophisticated, and it is that too, but it is cool and it works brilliantly. I love it, reason enough to buy this car I thought, and remember, I haven't moved it an inch yet.

After moving it a few feet, I could tell, this was a nice car, but after moving it 10 km, I knew it was one of the 10 best cars I have driven since I started testing cars, and I have been doing that for eight years now.

What makes it so good is how it feels. First of all, it feels solidly built. In a day when pretty much all luxury car makers are cutting corners in quality and saving themselves some money, Audi seems to be cutting their own profit, if it means they can give customers a better built car. This cars fit and finish is above phenomeninal. I will personally buy you a full tank of gas if you can show me a car that is built better than this Audi, even for twice the money. You can't, because such cars don't exist.

Everything in this car works flawlessly, and feels like it will keep working flawlessly for years to come.

It will keep you amused for years to come too, because the interior is a great place to be in. Not only is it spacious the seats are very comfortable as well, it looks good too, especially the dash and the navigation system, which has to be one of the top navigation systems I have used.

Speaking of the best, the engine deserves accolades too. The A6 I had came with the 4.2 litre, V8, which produces 335 hp and 310 lb/ft of torque. That makes it more potent than any comparable Mercedes, BMW or Jaguar unit of that size. Couple that with a wonderful six-speed automatic gearbox, with the Tiptronic feature (which allows for manual gear selection in an auto-box), and it becomes a glorious car to drive on any road, at any time, no matter what the weather is doing. I really do mean that. I drove it on a day when we had a severe wind warning. I was on the highway watching cars weave on the road in front of me because of strong gusts of wind, and I felt as safe and secure in the A6, as if I was sitting in a secure underground parking lot. The next day we had freezing rain and this car handled, braked and accelerated like it was on high grip tarmac on a perfect summers day. The famous Audi Quattro system is a huge part of the reason for its competence, and trust me, while there are some great all-wheel drive systems around, the Quattro is the best.

You know, I would like to say this car is phenominal, but it is much better than that.

Yes, I know, you're all waiting for me to find something to complain about, and here it is...I just wish I could afford to put one in my driveway all the time. Seriously, this car has no apparent flaws, nothing I can complain about, even after spending a week in it. Since I had the big V8, I thought it would have a drinking problem, but no. This car was just as fuel efficient as a V6 Toyota Avalon I had a few weeks ago, and Toyota was shouting loudly about how good their V6 is on fuel economy. This V8 not only has more power, its fitted in a heavier car, yet gives the same fuel economy as the Avalon. How does Audi do it? I have no clue.