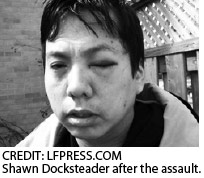 
On March 19, Shawn Docksteader was waiting for a bus at the corner of Western and Sarnia Roads when a black SUV drove by. A passenger shouted something at him, caught his attention, and then hurled a full can of beer at Docksteader's face.

"It hit me straight, right there," he said, pointing to his left eye. "It probably pushed my eye in a little bit. From the impact, (my right eye) got swelled up too. It was a pretty hard hit."

The first-year food and beverage management student remembered that he couldn't see anything out of his left eye, and the vision in his right was very blurry. "I found my way to a gas station," he said. The attendees called an ambulance.

At the hospital, doctors found that Docksteader was bleeding behind both eyes. "The retinas are attached to the brain ... they both got concussions in them. In my eyes," he said.

After an overnight stay in the hospital, Docksteader was ordered to rest both eyes, and wore bandages and goggles for a week to reduce his risk of rupturing the blood vessels in his eyes. "I just lied down with my eyes closed for almost a whole week ... I couldn't read, so I couldn't study or anything."

Docksteader said it was very difficult to take time from school, especially during such a busy part of the semester. "I was kind of upset that I had to miss all my classes. This is a really fun program, it's amazing. If (my injury) were serious, then I would have had to drop everything. My whole career was on the line for a minute there."

After taking some time to recover, Docksteader returned to classes on March 28. "With all the finals coming up, it's pretty tough. Now I have a pretty big caseload. The teachers have been pretty lenient, but I want to be able to have everything done with everybody else." He said he is optimistic about finishing his first year of the program.

As of April 6, he had almost made a complete recovery. "I'm feeling not 100 per cent better, but I am feeling a lot better. (My eyesight) is fully back, but it is a little bit blurry," he said, adding that he might need a new prescription for his glasses.

Docksteader said he has received a lot of support from his girlfriend, Elizabeth Wemigwans, and family, many of whom live in London and on the nearby Oneida reserve, as well as friends from school. "Everyone's been pretty supportive. They all want those guys caught. They want something done — it's not right for people to drive around and throw things."