Editorial opinions or comments expressed in this online edition of Interrobang newspaper reflect the views of the writer and are not those of the Interrobang or the Fanshawe Student Union. The Interrobang is published weekly by the Fanshawe Student Union at 1001 Fanshawe College Blvd., P.O. Box 7005, London, Ontario, N5Y 5R6 and distributed through the Fanshawe College community. Letters to the editor are welcome. All letters are subject to editing and should be emailed. All letters must be accompanied by contact information. Letters can also be submitted online by clicking here.
“Ok,” Tamara begins as she takes her seat in the booth opposite Mitch, “last week you practically lectured me on C. S. Lewis and Narnia.”

“Sorry, I didn't mean to come across as lecturing.”

“You're forgiven.” She pauses. “Anyway, I wondered if you've seen any other movies lately.”

“Let's see, there have been a few. How about Napoleon Dynamite?” 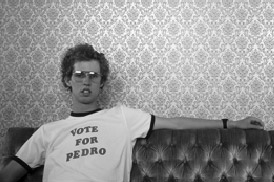 “Whaaat? I hate that movie. It's boring.”

“What about the part where Grandma makes a casserole for her lama but lets Kip and Napoleon fend for themselves?”

“Hilarious, um, I mean lame. The movie has no plot.”

“I didn't see that way. Part of what I think is going on is that it is a send-up of some aspects of American life. Like Uncle Rico, the ex-football player who is still bitter that his coach didn't let him finish the second half of a championship game in 1982. Or take the local high school beauties who think they are so good at copying Hollywood glitter. Or, one of my other favourites, Rex Kwon Do.”

“Well, these people, Rex, Napoleon, Kip, Uncle Rico, even the obnoxious Summer Wheatly, are trying to figure out where they fit in life. And really, that's not so different from where a lot of us are at.”

“And do they find out where they fit?”

“I think most of them manage to take some positive steps.”

“Well, Pedro discovers that he can win the high school election. Summer and her macho boyfriend discover that playing the glamour and tough guy game doesn't give the rewards it promises. Napoleon discovers that there is something he can do really well; he has abilities. He can dance.”

Mitch thinks for a moment longer. “Rico and his wife get back together. Kip and LaFawnduh get married. And Napoleon and Deb find out that they will probably make a great couple even though they don't fit the stereotype of sexually active, hip teens.”

“So, really the movie is a tribute to old fashioned family values, friendship and sexual reticence.”

“In my opinion, that beats the old fashioned and exhausting sexual libertarianism many people think is cool. So, yeah, I think it is a movie about friendships, faithfulness, and ordinary people taking care of each other.”

“Next thing you'll tell me is that it was made by Christians trying to inject Christian values into the movie viewing world.”

Tamara was shocked at Mitch's statement. “What?”

Mitch had expected a reaction like this. After all, Napoleon Dynamite was an MTV movie - not exactly a network associated with religion.

“A friend of mine who studies film told me the movie was made by Mormons,” Mitch explained. “And Mormons tend to value family, marriage and friendship much the same as Christians.”

Tamara thinks. “So, Mormons and Christians are the same?”