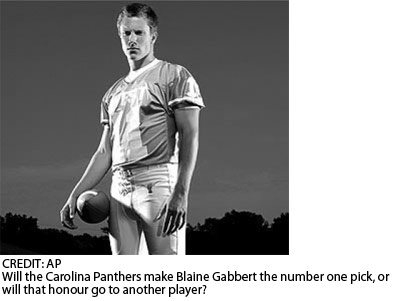 
This is one of the best times of the year. Not only is school almost done, but the NFL draft is right around the corner. I realize everyone and their uncle does a mock draft these days, but I'm the NFL Czar! How could I not?

1. Carolina Panthers select... Blaine Gabbert, quarterback from the University of Missouri. After plenty of speculation, the Panthers will go for the franchise QB. I don't think Gabbert is the best player available, but the Panthers will grab him based on the success of rookie QBs the past few years.

2. Denver Broncos select... Marcel Dareus, defensive tackle from the University of Alabama. The Broncos have a ton of needs, that's why they pick this early, but they go with the best available here. Dareus is a unique talent, and will dominate the line of scrimmage for years to come.

3. Buffalo Bills select... Cam Newton, QB from Auburn. The Bills need a playmaker, and Newton is just that. I think they will continue to play Ryan Fitzpatrick this year, but go to Newton in the future.

4. Cincinnati Bengals select... A.J. Green, wide receiver from Georgia. Carson Palmer or no Carson Palmer, the Bengals need a new playmaker. With Chad Ochocinco/Johnson getting up in years, the Bengals have to look to the future.

5. Arizona Cardinals select... Von Miller, linebacker from Texas A&M. The Cardinals need a QB, there is no doubting that, but with the top two off the board, they go with Miller. The best pass rusher in the draft, Miller will bring a new dimension to the defence.

6. Cleveland Browns select... Da'Quan Bowers, defensive end from Clemson. Another team that could go QB if one falls, but Bowers is an absolute beast who will become an impact playmaker on defence. They could also take Alabama WR Julio Jones, but I think they go with Bowers.

7. San Francisco 49ers select... Patrick Peterson, cornerback from Louisiana State University. The Niners have other needs, but Peterson may be the best player in the draft. Paired with Nate Clements, the 49ers may have the best secondary in the NFL.

8. Tennessee Titans select... Nick Fairley, DT from Auburn. At one point, Fairley was expected to go a lot higher than this, but he had a rough NFL Combine. He is a monster on the line, and could be even better than Dareus if he commits himself.

9. Dallas Cowboys select... J.J. Watt, DE from Wisconsin. I think the Cowboys will likely trade down from this pick, but if they stay, they should take Watt. It may be a reach, but Watt is very versatile, and would fit into the Cowboys three-four defence right away.

10. Washington Redskins select... Julio Jones, WR from Alabama. The Redskins are a mess, and need to have a good draft to get back on track. Jones is a dynamic star, who would become a big-play threat for years to come.

Unfortunately, I only have enough space to mock the top 10. There are plenty of mock drafts on the web, and I encourage you to check them out. Be sure to enjoy the NFL draft in a couple weeks, with round one taking place on Thursday, April 28. Hopefully, the NFL will not be locked out, and we can get back to watching football.