When pop and politics collide

As these words cut through the roughly tuned voice of one of the 20th century's most prolific political songwriters, the impact of current mainstream political protest music enters my mind. While the lyrical weight expressed by Bob Dylan and Joan Baez registered with the anti-war, peace-impassioned masses of the '60s and '70s, one must wonder: As we venture further into the 21st century, have these messages lost their capacity for change?

The vocalized battle against a particular condition, government or action is nearly universal in scope. Whether the issue is war, poverty, crime, apathy or oppression, the didactic nature of political anthems have stirred passions and encouraged mild social revolutions. 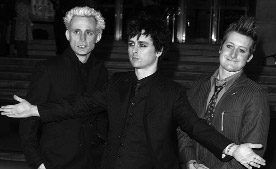 Poignant pieces such as the anti-lynching song 'Strange Fruit' sung by Billie Holiday presented disturbingly lurid images decrying the oppression etched in 1930s American society. The civil rights and anti-war movements of the '60s and '70s were underscored by Bob Dylan's 'Blowin' In The Wind' and Marvin Gaye's 'What's Going On?' The anti-establishment sentiment raged with the emergence of punk artists such as The Clash and the Dead Kennedys.

Each segment has drawn from the one before, proliferating into new genres while generating larger audiences. Grand Master Flash and the Furious Five slammed the frustrations and realities of ghetto life into the public consciousness with 'The Message' while Rage Against the Machine drew the masses with their fierce leftist ideologies.

Today, the anti-political fervour is still blazing with each genre getting a piece of the action. Presently, it appears as though a significant amount of the music championing the causes of the day are products of intricate marketing campaigns, rather than the driving force of traditional grassroots movements. As we further become desensitized by the perpetual rotation of graphic images and stories flooding our space, songs that could potentially emerge as anthems for mobilization fade into the playlists of edgy beats to download, then erase, when the next new hook is picked up the following day.

I have listened and watched the videos by Green Day dramatizing the tragedies of war, and attended the Live 8 concert as people around the world participated in the elevation of poverty awareness. The path ends there. At what point does the anger turn into action?

The same issues are being played out while the problems remain. Current urban and rap music, although not always overtly political, serve as a bleak reminder that while the vehicle of oppression has transformed from the times of Billie Holiday's 'Strange Fruit', discontent with government policy towards poverty and minority groups is very much pulsing through our society.

Green Day's staunchly anti-war release Bullet In A Bible has not veered from the anti-Vietnam war sentiments of the 1960s, only perhaps with the exception of added wailing guitars. Current political songs are only as strong as the media buzz and record company promotion surrounding them. Indeed, the idea of music as a catalyst for change amidst endless advertising chatter and spin is increasingly discomforting.

Perhaps in the end, the passion incited by songs of political protest, current and past, is all we can reasonably expect to attain. The rest must come from within.