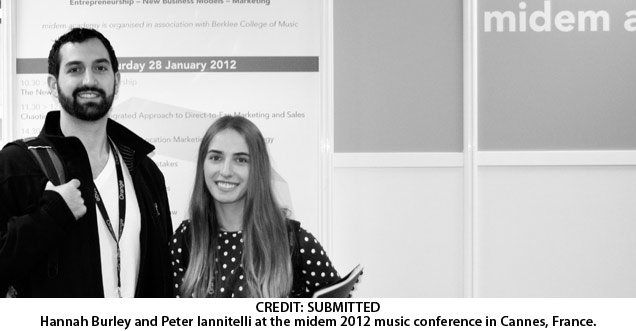 Short for Marche International du Disque et de l'Edition Musicale, it united a variety of musicians and was an opportunity for marketing and business people, journalists and others in the music industry to share their love of music and network with those in the business.

Unlike Canadian Music Week, which is a four-day conference started in 1981 (held in Toronto from March 21 to 25) or North By Northeast, which started in 1994 (also held in Toronto from July 11 to 17), Burley stated midem was more international and "businessoriented" in regards to the organization. Fanshawe was the only school in Canada that attended.

"Canadian Music Week is more focused on the Canadian industry, whereas midem is more international," she observed.

Iannitelli and Burley were also more interested in attending the seminars that featured Canadian showcases rather than the festival itself. There were also many emerging artists who could use the event to share their skills. "It offered a great chance to network and make new connections," said Burley. "Our program is great, but obviously people involved with music right now are involved with these conferences, so we have that opportunity to meet different people."

"We were the only school (representing Canada), for the most part. But Berkeley College (located in Boston) is associated with midem. They have a couple of schools internationally and those were the students that attended. They were a huge presence."

The aspect of using social media was a significant part of the conference and taught artists how to be more efficient rather than spend hours on the computer.

The language barrier was also not an issue, as everyone spoke English for the most part.

The support of the Fanshawe Student Union and VP of External Andrew Payne was also a help as Burley stated interest in attending midem has dwindled with regards to sending students.

"This was an extension from what I can't get from MIA and it opened my eyes to a part of the industry that I didn't know existed."

For more information, visit midem.com. You can also get Burley's firsthand experience of going to midem at her blog miaatmidem.com.

Preparing for a national skills shortage