Acura CSX: just a repackaged Civic with a bigger engine


The new Acura CSX is the replacement model for the 1.7 EL, a hugely successful car for the company. The question now is, will this new CSX do just as well, or better than its predecessor?

So, is it just a re-packaged Civic, or is there something more to it?

Well, the differences are few to be honest, but the main difference is that while the Civic sedan only comes equipped with the 1.8 litre, 140 hp engine, the CSX has a 2.0 litre, four-cylinder engine that produces 155 hp and 139 lb/ft of torque. 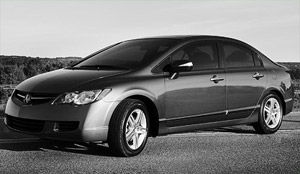 So the added displacement and horsepower means it has more performance, right?

Well not from what I could tell. I recently drove the new Civic with a five-speed manual gearbox, and the CSX I had also came with the five-speed manual gearbox, but the performance was not quite what I was expecting. Honestly, the Civic felt a lot quicker and faster. Perhaps the added weight of leather, sunroof and perhaps a few more goodies is weighing the car down. I guess the power-to-weight ratio isn't as good in the CSX as it is in a base Civic.

Making matters worse was the manual gearbox. The ratios had such long gaps in between them that it was actually tiring to work it up to speed. Imagine a fat kid doing sprints every few seconds; that's how it felt, out of breath and overworked. I haven't driven this car in the automatic version, but I am sure it'll be better than this manual.

While I don't agree with the huge potholes in the gearbox, I do know why they are there — for fuel economy. This car might not be a sprinter, but the fuel economy sure is great. I managed to cover 800 km with 65 litres, which is very good.

I'll tell you what else is good, the handling. This car has so much grip it just amazes you. My test car had winter tires, and in the snow, it stuck to the road like it was on rails. I even tried to shake its composure on an empty road at city speeds and it just went where I pointed it. Honestly, who needs all-wheel drive when you can get this much grip in winter from a front-wheel drive car. Then, on a dry day, I could point and shoot down corners as if I was on a qualifying lap at the Montreal Grand Prix. So, when it comes to handling, this car is great fun.

On other points it scores well too but with a dash of hope for improvement. Quality seems good, although it could be a bit better. The interior is fairly comfortable, but it needs more sound insulation to make it more comfortable on a long drive, and I wish it had more power with better gears.

Honestly, I think this is a good car, and taking Honda/Acura's reputation for reliability into account, this would be a sensible buy, especially at the base price of $25,400. Load it up, and it'll be over $30,000 and that is a lot for a car with bad gearing (Please Acura, fit a decent six-speed gearbox in it, it needs it).

If you can afford to spend over $30,000 on a four-door car, I'd advise you to stretch your budget to about $36,000 so you can buy an Acura TSX. You will soon read what I think of the TSX, but I'll leak this much for now; it most certainly is worth the extra money.