VANCOUVER (CUP) -- “What time is it?” was the cry of a lone voice that broke the relative calm on Robson St. in front of the Vancouver Art Gallery last Saturday. A chorus of voices from a large number of people lounging in the surrounding area steps answered, “It's 3 o'clock!” Within moments, a cloud of feathers was hovering over a full-fledged pillow fight.

The event, dubbed “the first ever Vancouver Flash Mob?” by its mysterious organisers mimicked a similar event that had taken place in San Francisco. Alerted about the event through an anonymous e-mail, a group of over 100 people arrived at Robson Square at the designated time—3p.m.—with pillows concealed, waiting for a signal. 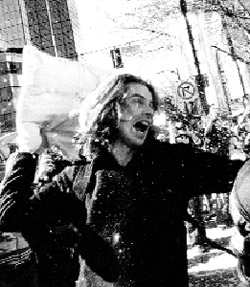 The e-mail had warned, “the first rule of Pillow Fight Club is that you don't talk about Pillow Fight Club,” a homage to the 1999 film Fight Club. This secrecy meant that none of the participants were aware of what that signal would be, or who else was participating.

Once the signal was given, though, it became very easy to distinguish who was “in”—the large cluster of people in front of the Vancouver Art Gallery laughing, screaming and beating each other with pillows.

“When else does this kind of thing happen?” said one teacher on hand to film the fight. He said he decided to show up because of, “the spontaneity, the goofiness of it.”

The event was certainly spontaneous, and those who were unaware that it would be taking place were none too happy with the outbreak of pillow-flailing mayhem. One man who had been displaying his artwork at the bottom of the gallery steps became engaged in a fight of his own to keep energetic pillow swingers away from his artwork.

The overall atmosphere, though, was one of fun and camaraderie as strangers aged five to 40 ate feathers and walloped each other with the soft stuff. Or not so soft stuff, as not every pillow at Pillow Fight Club was created equal.

The fight lasted for a well-timed 15 minutes, and ended with cheering and the throwing of pillows into the air in the style of a graduation ceremony. Once it was over, some stayed behind to make “snow” angels in the scattered pillow remnants, while the rest dispersed calmly, trailing feathers in the air behind them.